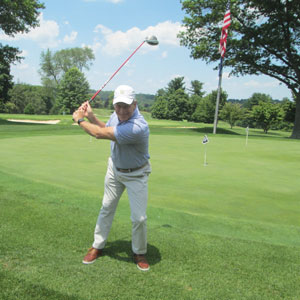 West Chester resident Jim Gasho directed his hobby of golfing to benefit local and international charities this year by “Playing His Age,” completing 62 holes of golf in one day on his recent birthday.

When he was 35, Gasho decided to shoot the number of holes on golf courses equivalent to his age, on or near his birthday in June. At 35, that sounded like an easy task. Now, at 62, it was a bit more challenging.

At 6:30 a.m., Gasho started golfing at the Golf Course at Glen Mills, then moved on to the Fieldstone Country Club, and finished up at 8:20 p.m. at West Chester Golf and Country Club. That included an hour-and-a-half delay due to lightning.

Gasho, an active member of the Rotary Club of West Chester since 1986, is no stranger to supporting charitable causes.

He has contributed time as club president and on many committees, and has participated in Brian’s Run, the annual Rotary Chili Cook-off, Rotary Fruit Sale, and Rotarians at Work Days.

Gasho has shared resources with his own club, with the Rotary International Foundation, and numerous local charities, donating also to community activities and events.

New this year, Gasho decided to invite others to support his golfing endeavor and contribute dollars to the West Chester Rotary Club Foundation, which supports local and international charities.

Twenty-nine individuals and 13 Rotarians donated $2,531 to the foundation immediately. However, Gasho reports that he continues to receive emails daily with donations.

Gasho says he had a bit of a tweak in his back before he started his marathon golfing this year and admits that five days later, he was still recovering.

What about next year?

“Next year is still up in the air,” he says.