Service Stories: From Firefights to Flies, Peril Came in Many Forms in Vietnam

Hershey resident Charles “Chuck” Bechtel went through intensive training to serve as an Army Ranger. This instruction prepared him well for the brutal combat he would experience in Vietnam. He survived nasty firefights with the enemy, but his tour would be cut short by the bite of a measly insect.

Bechtel was born in 1946 in Ashland, a small town in Pennsylvania’s coal country. His father, like almost all men of his generation, served in World War II.

Bechtel never really developed an interest in military service while growing up in Ashland. After graduating from the local high school in 1964, his family moved to Harrisburg. Bechtel bought a red Pontiac GTO convertible despite his father’s warning that he might get drafted.

Bechtel moved to Houston, Texas, where he lived with his aunt while taking medical courses at Methodist Hospital. By June 1966, Bechtel had returned to Pennsylvania.

He was working as a medical technician at Holy Spirit Hospital in Camp Hill when he received a draft notice. Despite the rise of antiwar sentiment across America, Bechtel never considered avoiding military service.

Bechtel was inducted into the Army at the New Cumberland Army Depot. He received his basic training at Fort Gordon in Georgia before going to Fort McClellan in Alabama for advanced infantry training.

“We found out that Fort McClellan was the home of the WACs [Women Army Corps], so we thought that was going to be a good thing. Well, we got to see the WAC barracks a couple of times as we marched by, and that was about it,” recalls Bechtel.

Bechtel needed to increase his salary to afford his car payments, so he signed up to become an officer. He was transferred to Fort Benning in Georgia for infantry officer candidacy school. To fill the ranks of units that were getting chewed up in Vietnam, the Army was pumping out 7,000 infantry officers annually.

As Bechtel notes, “The battlefield is always hungry for company-grade officers.”

The grueling training lasted 23 weeks, with many candidates dropping out.

“A lot of them just couldn’t handle the harassment and the pressure,” says Bechtel.

But Bechtel made it, graduating on July 3, 1967. After being given one day off for Independence Day, the newly commissioned 2nd lieutenant reported to Ranger School. The intense training in three different locations often produced injuries from mountain climbing and rappelling down cliffs.

Even though the trainees were officers, the trainers were sergeants. So Bechtel had to take orders from men he outranked.

“There is no rank here; you are a Ranger,” he was told.

This caused awkward moments. Bechtel recalls one precarious situation where he was hanging on the side of a cliff and shaking like a leaf. The sergeant yelled, “Ranger 23, put your right hand up and grab that rock.”

But, as Bechtel recalls, “You’d look at that rock and it was the size of a pimple. But that’s the one you’re supposed to hang onto.”

Despite the hardships, Bechtel credits the harsh crucible of Ranger training for teaching him how to be tactically sound — something he would rely upon in the combat to come.

As a new 2nd lieutenant, he was assigned to Fort Hood, Texas, to command a company of 250 soldiers in the 2nd Armored Division. This was normally a captain’s job, and it caused awkward moments because he would command soldiers who had already served in Vietnam. And some of these men were highly decorated.

“It was an indication, already in 1967, how badly the Army was bleeding from the Vietnam War. But President Johnson refused to call up the reserve military units because that would have signaled to Congress and the American people that we were indeed at war,” says Bechtel. 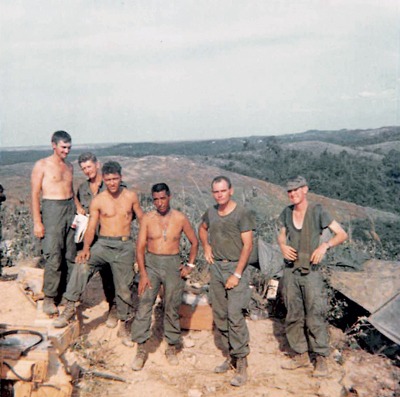 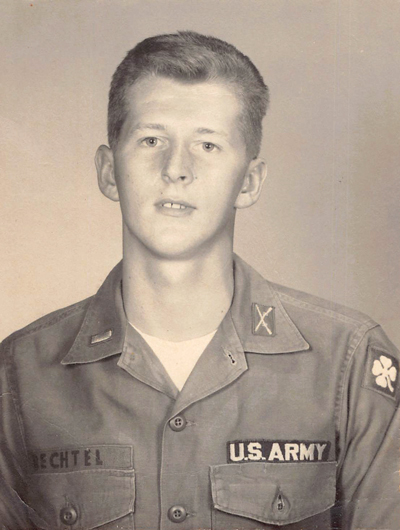 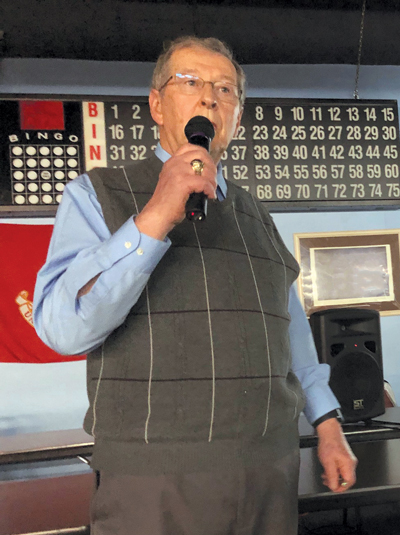 Bechtel arrived in Vietnam in June 1967. He landed at Cam Ranh Bay but was quickly sent to Camp Evans, where he was assigned to the 1st Cavalry Division. Upon arriving, a fellow soldier told him where the bunkers were located in case the early-warning alarm sounded.

On the very first night, while Bechtel was fast asleep, three rockets came in and went “Bam! Bam! Bam!” The alarm went off about two minutes after the explosions.

“That was a reality check,” says Bechtel. “The early-warning system was not, if you know what I mean.”

Bechtel was assigned to lead a 40-man infantry platoon that operated in Quang Tri Province, just south of the demilitarized zone. He participated in 25 aerial assault missions, flying into combat in a Huey helicopter. The landing zone (LZ) was always battered with artillery first.

“As we got closer to the LZ, our own gunships would come in and start shooting the place up,” he says.

But Bechtel and other leaders often didn’t know right away if the landing zone was “hot,” meaning enemy soldiers were shooting at them.

“The only way I knew if it was a hot LZ or not was if I looked around and my people were dead or shot up,” he says.

Bechtel vividly remembers one intense firefight when his platoon engaged the North Vietnamese Army. The Americans thought they had crushed the enemy with support from artillery and F-4 Phantom jets.

But at night, his platoon started taking fire from their rear, probably from local Viet Cong guerillas. One of Bechtel’s squad leaders completely broke down from the stress.

“I immediately had to get him out of there and get another squad leader in,” recalls Bechtel.

Like many American servicemen, Bechtel witnessed the conundrums faced by American soldiers in a war with no frontlines — a conflict in which a Vietnamese barber cutting your hair in the daytime might try to kill you at night.

“We knew we were going to fight a guerilla operation. We knew that the Viet Cong were good. We knew they would attack when and where they wanted, and then they would blend back into the population. But I don’t think that we were ever mentally prepared to see the people we were there to protect shooting at us,” he says.

Soldiers seeing their friends shot and killed inevitably caused tension with the locals, forcing Bechtel to occasionally step in and tell his men to back off. But this led some of them to question which side he was on.

Bechtel had survived about seven months in Vietnam when he developed a big, red lesion on his left arm, which kept getting worse. Bechtel went from hospital to hospital, but the infection was not correctly diagnosed until he was sent stateside to an Army hospital in Valley Forge, Pennsylvania.

It turned out he had leishmaniasis, a dangerous tropical disease caused by flesh-eating parasites. He contracted the disease from a sandfly bite somewhere in a Vietnamese jungle.

Army doctors eventually cured the illness and saved his arm, but it ended his tour in Vietnam.

Bechtel decided to remain in the military and would go on to serve in the Army and Pennsylvania Army National Guard for 36 years, retiring in 2002 with the rank of colonel. He immediately took a contractor’s position with the National Guard Bureau in Washington, D.C.

Bechtel points out that many returning servicemen did not exactly receive a warm welcome when they returned home.

“Some of them were actually assaulted by antiwar protestors. One of our pilots was actually spit on,” he says.

And returning veterans had to endure an endless stream of Hollywood movies, such as The Deer Hunter and Apocalypse Now. These films came with a political agenda that gave the American public a wildly inaccurate portrayal of the war and conveyed the false impression that all returning veterans were either drug addicts or baby killers.

“I have often wondered how those producers and directors would respond if we could look them in the eye and say, ‘Do you have any idea what that does to vets who went off and served their country honorably, and this is the kind of stuff they get when they come home?’” asks Bechtel.

Bechtel used the GI Bill to get an undergraduate degree in biology from Millersville University and a Master of Business Administration degree from Penn State. He and his wife, Joan, have a son, a daughter, and three grandchildren.

In 2014 Bechtel became active in the Liberty War Bird Association (libertywarbirds.com), where he now serves as director of marketing. This nonprofit refurbishes Huey helicopters that flew in Vietnam.

But Bechtel is quick to point out that the LWBA is not just about restoring and flying helicopters. The organization’s motto is: Educate. Honor. Restore.

“We want to educate the American public and other veterans on the absolute critical role played by the helicopter in Vietnam,” says Bechtel. “The helicopter was the workhorse of the field. Sometimes Vietnam was referred to as the Helicopter War.”

Bechtel is hoping that members of the public will come see these restored warbirds once the pandemic ends, particularly the Huey stationed at the Lancaster Airport.

“I had the pleasure of flying the helicopter myself,” he says. “I was an infantry officer in Vietnam. But one of the things on my bucket list was always to fly a helicopter. Flying that Huey to me is almost like a spiritual thing.”

And as the former Army Ranger concludes, “We not only restore helicopters, we restore the morale and esprit de corps of these people who worked so hard to serve their country way back when.”

Robert Naeye is a freelance writer based in Derry Township. He lives just a few hundred yards from Chuck Bechtel but hadn’t met him until he started researching this article. His website is robertnaeye.com.