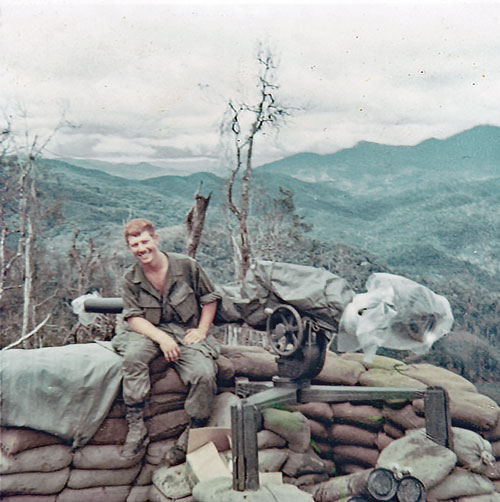 Soldier Stories: He Survived Firefights, Hepatitis, and a Landmine that Failed to Detonate

Central Pennsylvania resident Dan Dorsheimer had been in Vietnam for only three weeks when he went out on his first patrol as an Army infantryman. The events that followed would be seared into his memory.

His platoon destroyed a South Vietnamese village and killed a young Vietnamese girl.

He stepped on a landmine, which miraculously failed to explode.

But despite experiencing intense combat and becoming severely ill twice, he would survive his tour and return to his hometown.

Dorsheimer was born in February 1948 and raised in a family with a distinguished history of military service. His maternal grandfather served during World War I. His father fought in the brutal Battle of Okinawa in World War II, where he earned a Purple Heart. His brother also served in Vietnam.

“When our country called, we answered the call, and I’m very proud of that,” says Dorsheimer.

Dorsheimer graduated from high school in June 1966. Almost one year later to the day, he was drafted. He went into the Army so he would only have to serve two years.

“We didn’t hear a lot of positive things in those 17 weeks of training. They really beat us up physically and emotionally. That’s just how it was,” says Dorsheimer.

At the end of his training, Dorsheimer’s worst fears became reality: He received a letter ordering him to report to Fort Lewis, Washington, in the first week of November 1967. He realized he was going to ’Nam at a time when the war was intensifying and American casualties were starting to mount.

After a brief period of rest back home, Dorsheimer’s parents drove him to Baltimore for the flight to Washington.

“My mother watched the news; she knew what was going on in Vietnam. She was a mess. She didn’t know if she was ever going to see me again alive,” recalls Dorsheimer.

After stops in Hawaii, Wake Island, and Guam, Dorsheimer landed at Cam Ranh Bay in November 1967. He wondered why men were cheering as he got off the plane but then realized they were going home. They told him “to have fun.” Dorsheimer recalls being scared to death.

The next day, Dorsheimer flew on a cargo plane to the village of Pleiku in South Vietnam’s Central Highlands. There, he was assigned as a replacement to a company in the Army’s 4th Infantry Division.

To some extent, Dorsheimer lucked out. During his 366-day tour of duty, the North Vietnamese Army and Viet Cong concentrated their forces to the north and south of the Central Highlands, so, as Dorsheimer says, “We didn’t see a whole lot of combat for an infantry unit.”

Still, he saw horrible things and watched some of his buddies die. He calls his first three weeks in Vietnam “a nightmare,” and that experience included watching a fellow 19-year-old kid blow himself up while mishandling a grenade.

On his first patrol, his platoon went out in the morning on a search-and-destroy mission to a nearby village that was thought to be sympathetic to the Viet Cong.

The 40 or so men crossed a river and entered the village. The inhabitants lived in primitive conditions, with thatched dwellings and dirt floors. The Americans only saw old men, women, and young children.

As a newcomer, Dorsheimer depended on the officers and hardened veterans for his survival. But right away, he worried that his comrades were having too much fun searching and destroying.

Before departing the village, the commanding officer ordered the men to burn it down. The men set fire to the grass with their lighters, which then lit the hatched dwellings. Dorsheimer admits that he helped.

Dorsheimer was only 19, but he understood that ruining the livelihood of the locals was not exactly the best way to establish their faith in democracy.

Walking back to the base camp, the line of men suddenly stopped. The point man looked at Dorsheimer, who heard a “poof.” He realized he was in trouble. He looked down to see smoke coming out from his right boot.

He was told not to move. He had stepped on a small landmine consisting of plastic explosives.

Fortunately for the rookie soldier, the mine failed to detonate. Even if it did, Dorsheimer probably would have survived.

“It wasn’t meant to kill you. It was meant to put a hole in your foot and put you in the hospital.”

As the men neared base camp, they saw a Vietnamese person cross their path in a rice paddy. Someone behind Dorsheimer yelled, “Go ahead and fire.” After turning over the body, they realized they had killed a young girl. Making matters worse, some of the men laughed. 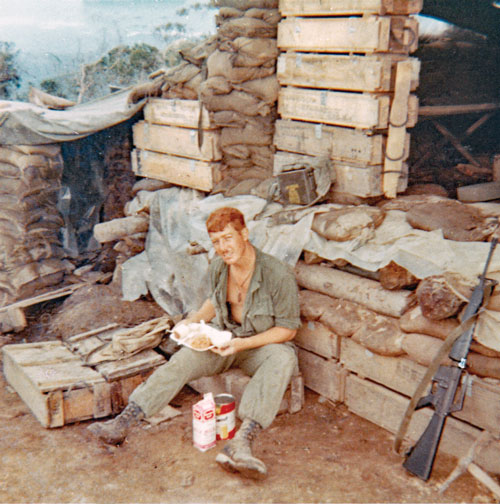 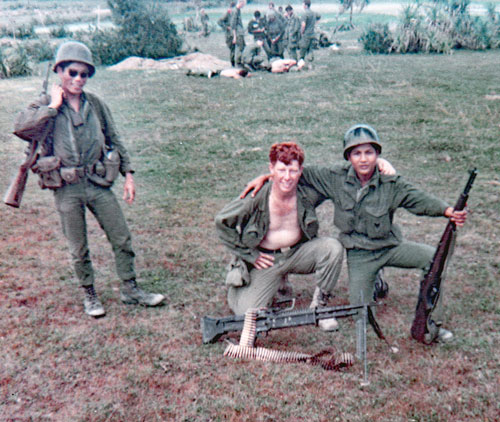 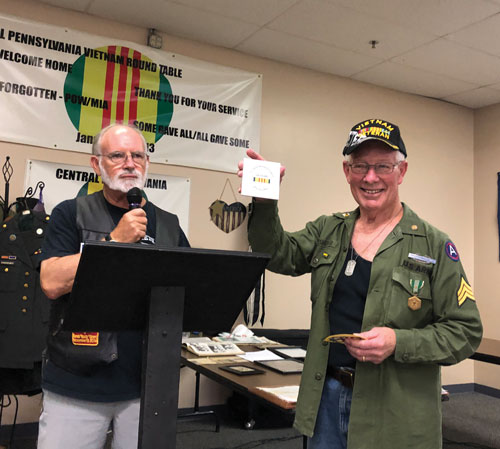 “I’m thinking, ‘What the hell is going on here?’” recalls Dorsheimer. “I wasn’t brought up that way.”

Dorsheimer’s company went on numerous jungle patrols but rarely made contact with the enemy. Still, these were arduous missions, with the soldiers carrying heavy loads, going many days without showers, and eating the same dreary rations day after day.

About five months into his tour, Dorsheimer contracted hepatitis and had to be medevacked to an aid station. By the time he got there, he was lapsing in and out of consciousness. He was freezing, but his head felt like it was on fire. He was running a high fever, so the medical personnel packed him in ice “like Charlie the Tuna.”

While recuperating at Cam Ranh Bay, he had an incredibly unlikely chance encounter with a fellow high school graduate, Rick Criswell, who was serving in the Army’s 101st Airborne Division.

The two spent several days together at the hospital and had a photo taken. They sent a copy to the local weekly newspaper, which published it on the front page of the April 19, 1968, issue.

Tragically, Criswell died in action four months later. Shortly after returning home from the war, Dorsheimer landed a job with a small bottling company. By an extraordinary coincidence, he discovered that Criswell’s mother worked there too. He went to see her and saw that she was reading the paper.

“I turned around and said, ‘Mrs. Criswell, hi, I’m Dan Dorsheimer.’ The tears rolled down her cheeks. It was Rick’s mother, probably two years after she buried her son. That picture in the [newspaper] was quite possibly the last picture she saw of her son before she saw him dead in that casket.

“She never came back to work, and I have never seen her to this day. Why did that happen?”

Dorsheimer vividly recalls a pitched firefight after recovering from his illness. He watched one of his fellow soldiers die from a bullet fired from a nearby village. Suddenly, two American jets zoomed by at low altitude and dropped canisters of napalm on the village, incinerating everything.

“No fireworks display can do what these two canisters did,” says Dorsheimer. But the attacks ceased.

This young soldier would survive several more firefights and a bout of malaria. Dorsheimer received several ribbons and a letter of commendation for his service, but he is quick to dismiss any notion that he was a hero.

“I didn’t do more than any of the guys beside me. People back at base camp wrote this stuff up to try to build morale,” he insists.

Despite everything he endured and all his unpleasant memories, Dorsheimer has built a successful postwar life. He retired in 2011 after working 22 years for Coca-Cola, and he has been married to his wife, Fran, for 28 years. Their son, Sage, currently lives in Williamsburg, Virginia.

Like many Vietnam veterans, Dorsheimer has found it difficult for other people to relate to his wartime experiences.

“For 46, 47 years, I didn’t talk about it because no one cared. Even the veterans [here in town] really didn’t acknowledge us at the Legion and the VFW. Yeah, they signed us up, but they told us, ‘That’s not a real war.’ Yeah, tell that to the 58,000 people who died.”

But like most Vietnam veterans, his war experiences remain a defining part of his life.

“I was 19 when I landed, 20 when I left. I’m proud of my service, as is my father, my grandfather, and my brother. I’m not proud of some of the things that we did. We did some really nasty things.”