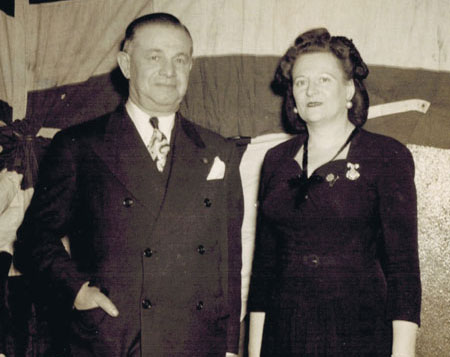 My paternal grandparents’ Jan. 18 anniversary was a big deal in our family and elsewhere.

My parents gave Grandma and Grandpa 40th and 50th anniversary parties in 1958 and 1968, respectively. For the 50th in 1968, my dad rented out a function room at our country club. A golden anniversary demanded such a posh venue, I guess.

Being 16 at the 50th, I was able to appreciate the math that said that my dad was 49 and 4 months old at this 50th anniversary.

It made me mostly believe that my grandparents got lucky on their wedding night or shortly thereafter — and also lucky when my dad was born healthy on Sept. 2, 1918, five or six weeks premature.

Besides, as a callow 16-year-old, any other explanation besides prematurity quickly evaporated via my image of 1918 as still Victorian, and, after all, it was not in the anniversary spirit to question my dad’s conception date.

On or near Jan. 18, 1978, my grandmother, Minna, and grandfather, Harry, took their 60th anniversary public via a testimonial dinner sponsored by the Jewish War Veterans for my grandparents’ 30 years of dedication — especially my grandmother, who served as past president of the Ladies Auxiliary.

I’m sure my grandmother gave a strong speech that night, rising from her guest-of-honor seat. At 81, this speech was probably as robust in lauding her veteran friends as her 97th birthday speech was 16 years later.

When I perused the copy, I immediately got a bingo. There was my great-grandmother’s maiden name, Bessie Fivoshovitz. But more glaring than the “Fivoshovitz” discovery was the date of her son’s marriage to Minna — July 1, 1918! What about Jan. 18?

What I took away most from this marriage certificate was not a blight on the family tree for my dad’s not-quite-kosher conception. No, I saw the certificate as evidence of my of grandmother’s independent spirit.

First evidence of her independence was her gig as a teenage piano accompanist in a silent movie theater, when the vast majority of girls and women worked as clerks or in factories.

Then, at 20, she had disregarded society’s behavioral expectations by marrying while visibly pregnant.

Yet she was no true rebel. She forever made an effort not to observe her anniversary on the more compromising July 1 date.

Family lore has it that my grandparents eloped on Jan. 18, 1918, and went to Rhode Island to get married once my grandmother did not get the family blessing. The blessing was denied because my grandmother would be leapfrogging into marriage over her older sister.

The elopement, of course, would have been a characteristically feisty move by my grandmother. But I found no marriage of my grandparents recorded in Rhode Island, so maybe they claimed they eloped or just drove to Rhode Island to keep up the pretense.

Grandma Minna, in her late 40s, expanded her life from preparing gefilte fish to cooking up a volunteer career with veterans associations. Her innate leadership and intelligence propelled her to become national president of the Ladies Auxiliary of JVW in 1951 and then to start up an Amputee Veterans of America group.

With these voluntary leadership positions, she clearly expanded the ingrained roles of mother and housewife that were her generation’s expectation. Yet again, she didn’t transcend this role, although she had the capability and financial need to go after a decent-paying job.

But she never saw herself as more than a housewife — where she was supposed to bake bread instead of earn it — until she was in her 70s. Perhaps influenced by feminism, she became a real estate agent, but she wasn’t very successful because, as with many women of her generation, she didn’t drive.

Sadly, I think Minna, my grandmother, got married 100 years too early. If she were 21 and pregnant now, and planning a July 1, 2018, wedding, I know she would be the kind of 21st-century woman who would post online an ultrasound photo of her in-utero boy together with details of her upcoming wedding.

At any rate, I was happy to commemorate the real 100th wedding anniversary of my grandparents on July 1, 2018. With 15 hours of sunlight, it is more enlightening than Jan. 18.

Bill Levine is a retired IT professional and active freelance writer. Bill aspires to be a humorist because it is easier to be pithy than funny.