On Life and Love after 50: Why High School Reunions are Good Places for Singles to Meet

In a recent e-newsletter, I wrote about a couple who started dating after reuniting at their high school reunion in 2018. The woman lives in Illinois; the man lives in California, near his three daughters, seven grandchildren, and 96-year-old mom. 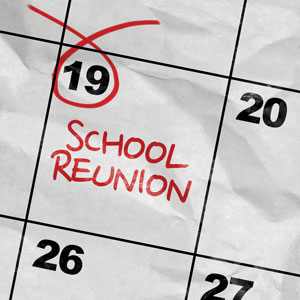 The woman is frustrated because they live so far apart. She wonders if she’s wasting her time with him. Readers responded, including a woman named Althea, who wrote:

“Your recent article inspired me to share this high school reunion story with you. My half-brother, Ray, who is now 89, was married for over 50 years to Shirley and was widowed in March 2010 at the age of 77.

“In 2011, there was a summer high school class reunion in our hometown of Foxboro, Massachusetts, which he attended. He was living in South Carolina.

“At that reunion, he met Diane, a woman he had known in high school, who graduated a year after he graduated. He knew her through a family member of hers. She is a retired nurse and a widow with five kids, and Ray also has five kids.

“Diane lived in Ohio. Ray visited her there, and she visited him in South Carolina. Plus, between visits, they spent a lot of time talking over the phone.

“Ray and Diane married a year after Shirley died. I thought it was crazy and disrespectful to his wife of 50-plus years until I talked to him and my nephew, his oldest son, about it. They both said that Shirley wanted Ray to be happy and not be alone for the rest of his years.

“Even though Ray and Diane married quickly, they are still together and happy, now living in Ohio in an assisted living facility.

“The key to senior relationships is honest and upfront communication. The woman from your most recent article needs to have communication with the California guy if they are to be a forever couple who met at a high school reunion.”

I’ve written about two of my high school classmates — Phil and Sue — who hadn’t seen or communicated with each other since graduation. At our 50th Jackson, Michigan, high school reunion in 2007, they spent 20 minutes talking to each other. Both were married at the time.

Five years ago, Phil became a widower. He heard from another classmate that Sue was divorced. He lived in California; Sue lived in Michigan. He contacted her and asked if he could visit her. She said yes.

When they were together in Michigan for a week, they realized they had special feelings for each other. After he returned home to California, he proposed to her over the phone. They were married two weeks later in California. Sue moved there to be with Phil.

1. The number of singles attending increases. As we age, more and more people who attend reunions are single again. Often widows and widowers attend because they know the people and feel more comfortable among them.

2. A single person might see someone they had secretly admired in high school who is also now single. Why not spend some time together?

3. When people who have known each other for years share memories and experiences at class reunions, they often have much in common, which is an important factor in compatibility.

4. Sometimes, people from different graduating classes also attend reunions, which means even more singles are there. You might meet someone older or younger whom you didn’t even know before.

When you receive that reunion notice, don’t just toss it aside. An unexpected meeting could happen.