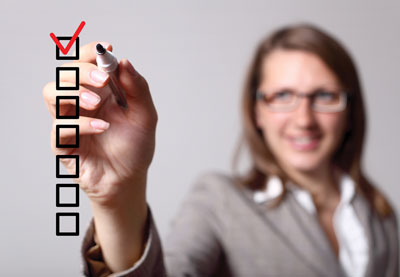 On Life and Love after 50: Is Your Qualities-Wanted List Up to Date?

In 2003, I published a dating guide book for middle-aged singles that had a chapter devoted to the importance of singles making a written list of the qualities wanted in a potential mate.

The purpose of the list was simple: to help singles avoid becoming involved with a person “not right” for them, which could waste time, energy, emotions, and even money.

In the chapter, I advised keeping the list simple, 10 items or fewer, in order of importance. Plus, I stressed that the list should simply be a flexible guide and not a rigid qualifying tool.

There were no right or wrong lists — everybody is different — but I did suggest some examples of what qualities a middle-aged woman might want a partner to have:

• makes me a top priority

• has a positive attitude and a sense of humor

• is carefree and relaxed with little drama

• gives me “my space” and respects me

• is attractive; I feel chemistry and warmth

There were two cardinal rules to list-making. First, follow the golden rule. What a person wanted from a mate, he or she must also give in return. Love is a two-way street.

Second, I strongly warned singles to never pull the list out to look at while on a date. Can you imagine someone placing his or her list on the table and saying to a date, “You’re a little weak on item No. 6”?

During the pandemic, in discussions with single, senior men, the men have talked about qualities wanted in potential mates. I wondered if the qualities they seek now are different when compared to 17 years ago.

Wayne, 72, met a woman online who listed a plethora of things she wanted in a mate — hiking, dancing, being active, going to concerts, picnics, and walking. Plus, she listed, in boldface, that a potential mate had to be of the same political party as she — no exceptions.

To avoid wasting time in looking for love, Wayne added political-party preference to the top of his 2020 qualities-wanted list.

Larry, a widower in his late 70s, talked about his list of qualities wanted. He asked me if he was wrong by placing chemistry and physical attraction at the top of his list.

That was interesting because 17 years ago, people often said to me that chemistry was about No. 5 on their lists (I often wondered if they were being honest, embarrassed to admit they ranked physical attraction much higher).

I suggested to Larry that he wasn't wrong, as long as he was honest about it with the women he was meeting.

There were two unacceptable qualities that both Wayne and Larry mentioned. Neither wants to remarry nor to date women whose children or grandchildren were living with them.

Oh my, does that now mean senior singles need two lists? One for qualities wanted and one for unacceptable qualities?

The question is, will senior singles take the time to make two written lists? Probably not. Just making one list is even a stretch.

However, it’s sure important that they know what qualities they want and don’t want, whether they write them down or not.

The objective of making lists might be even more important now that we are 17 years older. We want to avoid wasting time — because we’ve got less time to waste.