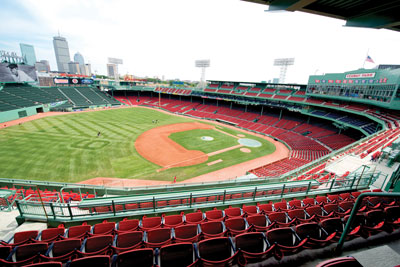 Booming Voice: Of Pandemic and Pandemonium

My late dad and I have both been in the crosshairs of a pandemic, albeit 102 years apart.

His premature home birth on Sept. 2, 1918, in Malden, Massachusetts, was only 8 miles from the epicenter of the Spanish flu pandemic in Boston: a naval barracks ship, where the flu claimed two victims on Aug. 27, 1918, and then mercilessly killed over 3,000 Bostonians by late October.

As a child under 5 years old, Dad was in a most vulnerable category. My age of 68 in the age of COVID-19 has made me a vulnerable target for this insidious pathogen.

Dad’s family was truly in a more precarious situation in 1918 than we are now in 2020. My wife and I were in Florida, where the virus was relatively dormant from March until we left in the end of May. We came back to a Greater Boston that had flattened the curve.

Dad’s family in Malden consisted of Dad and my grandparents on one floor and my great-grandparents and my teenage great-uncle on the other floor. Growing up I always admired a picture of my grandfather, young, proud, and spiffy in his World War I naval uniform. But was it also the picture of a Spanish flu carrier?

Family lore has it that my grandfather was stationed in Groton, Connecticut, and Boston during his duty tour. If he was in stationed in Boston in September, he could have been one of the 2,000 of 21,000 sailors infected by the flu by mid-September.

There are, of course, a lot of “ifs” here, and family lore is no substitute for military records. But my grandfather certainly could have been home following my dad’s Sept. 2 birth, if stationed in Boston.

Dad survived the pandemic in 1918, in spite of possibly difficult odds, and I have so far ridden out the first wave of the 2020 pandemic without catching COVID-19.

My COVID-19 fantasy is that Dad and I, alive during the 1918 and 2020 baseball seasons but on parallel pandemic experiences, could be united just once in 2020 to watch a Red Sox game and celebrate our joint survivorship as pandemic-vulnerable individuals.

Indeed, Dad was born on the last day of the regular 1918 season on Sept. 2. The season was shortened to 130 games due to World War I, but the Red Sox had won the American League pennant so they continued on to meet the Chicago Cubs in the World Series.

Games 4-6 were played at Fenway Park from Sept. 5-11, the same time the public became aware of the flu breakout at Boston’s naval installations.

Even these reduced crowds abetted the pandemic, with fans seated in Fenway’s closely packed seats. There was no parade that year because of the flu, so it would be over 86 years until Red Sox fans witnessed a championship parade.

In the midst of our current COVID-19 pandemic, MLB teams will play only 60 games, with an average attendance of zero. I have already watched the odd spectacle of no 30,000-member Greek chorus of fans commenting on the proceedings with boos, cheers, claps, waves, screams, and yells.

Dad passed away in 2013, right after the Sox won the series. He too would find the fan-less games strange. Yet separated by 102 years, it would special if we, two virulent virus survivors, could witness a baseball game together in a common pandemic.

My fantasy I will borrow from the Field of Dreams script. I will constantly hear voices saying, “If you buy it, he will come.” I will then go out and get a 75-inch, whip-smart TV, with full wraparound sound.

Then Dad and I, on parallel pandemic paths, will coexist for a plague moment. We will watch a quiet, soulless, empty-Fenway Red Sox game. I will then play a YouTube clip of the last out of the Red Sox 1967 season that sealed a 5-3, pennant-clinching victory over the Twins, an epic event Dad and I witnessed on our den TV.

The fans streamed onto the field, mobbing pitcher Jim Lonborg, who is barely visible in the huge scrum. Broadcaster Ned Martin described it perfectly: “It’s pandemonium on the field.”

We then will switch back to the empty Fenway Park, where players after a Sox win are as jubilant as can be under social distancing, pantomiming high-fives. The announcer, my dad and I would agree, should say, “There is pandemic on the field.”

Bill Levine is a retired IT professional and active freelance writer. Bill aspires to be a humorist because it is easier to be pithy than funny. He may be reached at wlevine0607@comcast.net.