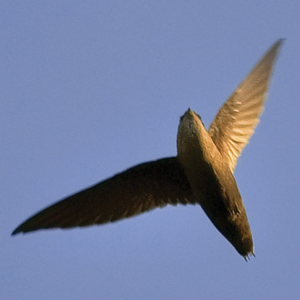 The Beauty in Nature: Chimney Swifts

I remember walking along a sidewalk when I was 5 years old and hearing chattering overhead. Looking up, I saw a loose group of small birds flying swiftly.

I later learned those rapidly flying birds were chimney swifts: sparrow-sized, sooty-gray birds that nest down the inside of chimneys in cities and towns across much of the United States and southern Canada.

I now look forward to seeing swifts every summer because they are entertaining to watch careening and diving across the sky all day, every day, in pursuit of flying insects over cities, towns, and fields.

Chimney swifts avoid northern winters, and starvation, by migrating south to northern South America, where they catch flying insects. But they return to North America by the middle of April, ready to raise young.

Swifts are perfectly built for how they live. They have large, powerful chest muscles and long wings for sustained, maneuverable flight, but tiny, weak legs that only cling to rough surfaces by their sharp nails, which is all swifts need legs for.

Their small legs reduce body weight for more ease in flight. And swifts have large gapes to their small beaks to better snare flying insects.

Chimney swifts traditionally rear offspring in still-standing, but hollow, broken-off trees. To swifts, I guess, the innumerable chimneys resemble hollow trees, so they nest in many of them, which has greatly increased their populations.

Swifts build unique cradles of tiny twigs and their own saliva, which glues those twigs together and attaches them to the inside of chimneys. Each female swift lays three or four eggs on her twig nursery. And each pair of swifts feeds flying insects to their young on their platform.

Close to sunset each evening, starting around the middle of August, swifts congregate in swirling flocks over a large neighborhood chimney, which is exciting to experience. Round and around that chattering gathering wheels, while a few swifts at a time drop out of that whirling mass and dive into the chimney to spend the night.

As dusk deepens, several swifts at a time drop into the chimney. Soon, the rest of that circling congregation flies down the chimney, looking like smoke in reverse. Finally, only a few swifts are left in the sky.

Flocks of chimney swifts migrate south during September. I’m always excited to spot some of their groups wheeling after flying insects as they drift along. Again, they are entertaining to see.