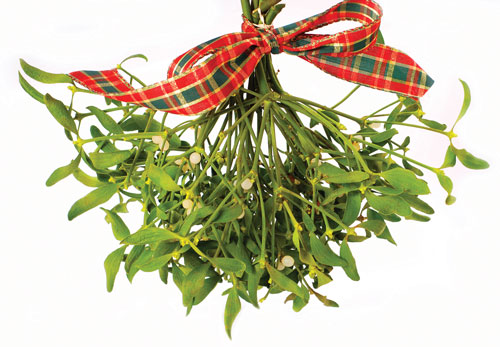 Dessert on the Ceiling (and Other Kooky Christmas Traditions)

More than 160 countries around the world celebrate Christmas. Overseas and elsewhere, some holiday traditions may seem wonderfully weird — and maybe even a bit bizarre. For some chuckles, let’s check out the yearly happenings in:

Slovakia: During Christmas Eve dinner, the oldest male resident tosses a spoonful of loksa pudding (a mixture of sweetened poppy seeds, bread, and water) onto the ceiling — the more that sticks, the better his crops or business will do during the next year.

Guatemala: Each neighborhood sweeps dirt into one large pile and then plants an effigy of the devil on top before setting it on fire.

England: The idea of kissing under the mistletoe began here. Refusing a smooch was said to bring bad luck, and one tradition required that, with each kiss, the participants pluck a berry from the mistletoe bunch.

Venezuela: Caracas streets close to all traffic when Christmas Eve arrives. This is a safety measure as many city dwellers roller-skate — nobody seems to know why — to late-night Mass.

Norway: All brooms are hidden in order to keep witches from finding them and riding off into the Christmas Eve night. Men also fire their guns into the evening sky.

Japan: Since 1974 the power of persuasive American advertising has established a newer tradition: enjoying a Christmas Day feast at the nearest Kentucky Fried Chicken restaurant.

Greenland: Folks relish holiday treats of mattak (whale skin with a strip of blubber inside) and kiviak, the raw flesh of auks (a type of Arctic bird) that has been buried whole in sealskin for seven months until it has reached a certain level of decomposition. (Seconds, anyone?)

Wales: Some villages in South Wales celebrate Mari Lwyd, a wassailing folk custom in which a local man parades through the streets, his identity hidden under a sackcloth while bearing a horse’s skull on the end of a stick.

Germany: Each Dec. 5, German children leave a shoe outside the house. Well-behaved kiddies awake to find the shoe stuffed with sweets. Those behaving otherwise are likely to find a tree branch instead.

Canada: There’s an actual postal code used in Canada to send letters to the North Pole: HOHOHO. All the letters received, even those in Braille, are answered by thousands of volunteers who donate their time every year.

Czech Republic: Some folks fast on Christmas Eve in the hope that they will visualize a golden pig — a sign of good luck — appearing on a wall before dinner.

South Africa: After residents enjoy a traditional Christmas Day meal, they eagerly tuck into after-dinner treats of plump, fuzzy caterpillars that have been fried in oil.

Final thought: Doesn’t it make you wonder how some of our own Christmas traditions might seem strange to others, as well?

Randal C. Hill can be reached at wryterhill@msn.com.