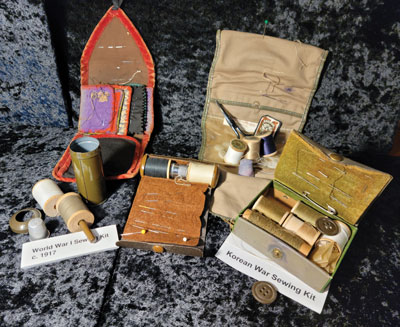 First used in print in 1749, the term “housewife” has been used to denote a sewing kit commonly used by the military. The pocket sewing kit was also known as a “hussif” or “hussy” (also spelled “huswife”).

At a time when military uniforms were handmade and had to be provided by the recruit, a soldier’s gear included a sewing kit. This was typically made by his mother, his wife, or his sweetheart as a farewell gift. Often, they would personalize the sewing kit with embroidery.

Soldiers tucked away personal mementos as well as sewing items in the handy pockets. “Dog tags” with a soldier’s identification were not introduced until 1906. The sewing kit decorations and mementoes often helped the military identify a soldier lost in service.

The typical “hussif” included thread and wax for waterproofing it, darning wool for socks, a small scissors, needles, pins, extra buttons, a thimble, and other small mending materials. These were necessary items.

As important, the skills to use them were vital because soldiers had to maintain their uniforms. Before the advent of safety pins (by Walter Hunt in 1847), the “housewife” was useful for mending uniforms and sewing on buttons, ranks, and awards.

The needle could also be used for removing splinters and, on occasion, sewing up a wound.

The “hussif” sewing kit was usually made from fabric scraps of linen, wool, and cotton and edged in twill tape. The early kits were made of two strips of fabric, one constructed on top of another. The approximate dimensions were 3-8 inches wide by 12-24 inches long.

A series of pockets were then stitched across its width. It folded or rolled on itself and was tied closed with a string fitting neatly in the soldier’s pocket. It was always carried on their person.

From the mid-1800s to mid-1900s, a khaki roll-up pouch holding thread, buttons, scissors, needles, and a thimble became standard Army issue. Initially there was a generic Army pouch. Ultimately each branch of the U.S. military had its own sewing kit because the color of the uniforms and buttons varied.

The U.S. military “housewives” included dozens of styles of rolled fabric pouches as well as small canisters with spools of thread, needles, and a thimble in the cap. Box kits in military solid colors and camouflage were and remain available. Some were regulation issued. Sewing kits were also sold in nearly every Post Exchange, tailor shop, and dime store.

During World War I and World War II, women’s sewing groups and local chapters of the Red Cross made sewing kits to include in care packages for American soldiers. The Red Cross supplied these groups with the pattern, the contents, and a tag with the local chapter’s information.

While sewing kits are still available today, they are not standard issue to members of the military.  This column is dedicated to our veterans and active-duty military personnel. Thank you for your service.