The History of Ordinary Things: Husking Tools and the Homestead Act of 1862

The 1862 Homestead Act, signed by Lincoln prior to the Civil War, was an important piece of legislation about federal land.

The Homestead Act provided that any adult citizen who had never borne arms against the U.S. government could claim 160 acres of surveyed government land. Claimants had to live on the acreage for five years and improve their plot by cultivating the land and building a home.

The Homestead Act led to Western expansion and allowed citizens of all walks of life — including women, immigrants, and former slaves — to become landowners. The harsh winters, barren land, and isolation resulted in many abandoning the homestead prior to completing the five years.

If the claim was successful, by the 1900s, about 60 of the 160 acres were planted in corn. It was grown for livestock feed and for the next year’s corn seeds. The ear of corn had to be removed from the stalk by hand, and the husk had to be manually removed for use.

Early American settlers learned about the husking peg, or pin, from the Native Americans. Just a pointed stick or bone, they were tied over the joints of the fingers with vine and later leather. The peg worked by thrusting it downward between the husk and the ear and grasping the husks with help of the thumb.

The husk removal with the peg required two passes over the ear. The wear on the thumb was so great that a thumb cot, or stall, was designed to protect the thumb. The thumb stalls were made of leather with attached metal rivets or of a chain mesh. Leather straps held the stall in place.

Husking hooks were introduced in the 1880s. There were three designs, each a metal plate with punched V-shaped hook(s) bent outward. The hooks attached to a heavy leather pad held on the hand with wrist straps. The palm hook had the hook high in the middle of the palm. The wrist hook was positioned low on the wrist. The thumb hook was placed over the thumb pad.

The husking hooks required only one pass down the ear of corn, making picking faster. The choice of husking hook position was a matter of personal preference. (The thumb hook was preferred 2-to-1 in the corn-picking competitions of the early 1900s.)

My late father, James Montag, was an Iowa farmer who collected early harvest tools and passed his collection on to me. As a boy of 16, he remembered picking corn for 3 cents a bushel during hard times in 1934.

He once described Depression-era corn husking to my sister for a college project. She summarized his experience in this excerpt:

“The corn picker walked between two rows of corn with the wagon and team of horses to his right. He found the corn ears on each stalk with his left hand and raked the ear across the husking hook, or husking peg, on the right hand.

“In the husking action, the ear was transferred to the right hand, broken from the stalk, and thrown overhead into the wagon with a snap of the wrist. The best corn huskers always had an ear in the air. The wagons had a bang board on the opposite side, creating a large target for the flying ears of corn.

“A successful picker could hand pick 1-1.5 acres per day. If corn yielded 60 bushels per acre (typical of the 1920s), the picker harvested an average of 60-100 bushels per day. The pay for picking was generally 6 or 7 cents per bushel.”

Commercial corn production was not possible until the husks could be removed mechanically. The first mechanical corn picker was introduced in 1909. By the 1920s, a one- and two-row picker powered by the tractor allowed growth in acres planted to corn.

The impact of corn and corn syrup in our economy and our diets has been present since the 1940s-’50s. 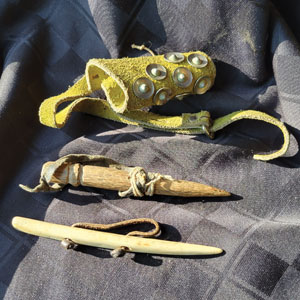 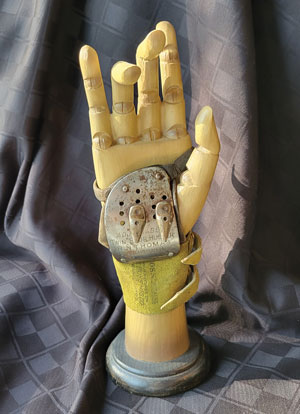 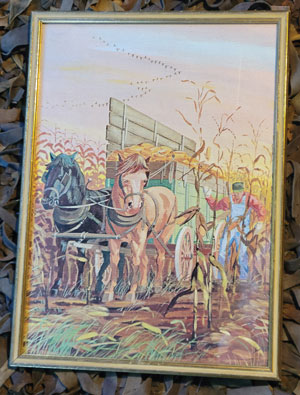