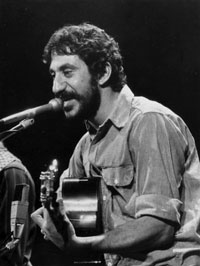 It Was 50 Years Ago Today: ‘You Don’t Mess Around with Jim’

In Jim Croce’s brief career — he died at age 30 in a 1973 Louisiana plane crash — Croce released five Top 10 singles, the first of which was one of the best story songs of modern times.

“You Don’t Mess Around with Jim” on the ABC label brought music fans into Jim Croce’s fun-loving world, one that was often replete with rather bizarre (but always memorable) characters.

Born in Philadelphia, Croce played the accordion before switching to guitar. After high school, he attended Villanova University, where he worked as a guitarist in numerous bands.

He graduated college in 1965, became a guitar instructor at summer camps, and briefly taught at a Philadelphia middle school. (One undocumented story has Croce being beaten up by a 250-pound girl student in front of the class.)

He met Ingrid Jacobson at a folk music party in 1966. They married and began writing and recording their own compositions, frequently touring and trying in vain to catch a break.

Eventually discouraged, the Croces settled onto a Pennsylvania farm with their infant son, Adrian. Croce drove trucks and worked construction while Ingrid finished college. All the while, Croce continued to write songs, never abandoning a lifelong dream of having a music career one day.

He turned to selling advertising time on Philadelphia radio stations. His work occasionally took him into the darker corners of the city, where he would sometimes visit less-than-savory pool halls.

Ingrid recalled later, “He would sit there and watch the pool games and see what people were doing. He ended up with a guy named Jim Walker, who was one of the guys who used to play pool there.”

And what a character Big Jim Walker became in “You Don’t Mess Around with Jim”! In Croce’s mind, he imagined a cartoonish version of an intimidating New York City pool hustler — big and dumb as a man can come, but he’s stronger than a country hoss.

Walker reigns supreme around town as “the king of 42nd Street,” and he cruises his domain in a “drop top” Cadillac.

As the story unfolds, we learn that Big Jim hustles people for money with his well-honed pool skills. But one day, a Southern boy nicknamed Slim comes to town, explaining that Walker had recently hustled him and that Slim was there to get his money back. (Good luck, Slim!)

Big Jim’s sycophants then explain some basic survival tips to the visitor:

You don’t tug on Superman’s cape

You don’t spit into the wind

You don’t pull the mask off that old Lone Ranger

And you don’t mess around with Jim

A bloody melee erupts, and to everyone’s surprise, Slim manages to dispatch the fearsome bully. Big Jim’s followers then acknowledge the new order, and the last time we hear the catchy chorus, we’re made aware of one crucial change:

You don’t tug on Superman’s cape

You don’t spit into the wind

You don’t pull the mask off the old Lone Ranger

And you don’t mess around with Slim