The History of Ordinary Things: Ladies’ Stockings over Time

Hosiery was worn as early as the 15th and 16th centuries, almost exclusively by European noblemen for horseback riding. In 1560, Queen Elizabeth I began wearing knit silk stockings for their softness and comfort. They were not elastic or supportive and had to be kept up by garters attached to a belt.

In the early 1900s, full-fashion, thigh-height hose was knitted flat, cut, and sewn together down the back of the leg. This created the famous seamed leg, which, incidentally, was not popular among women, who wanted to appear as if they were not wearing stockings.

Imagine the scandal of appearing in public with bare legs! And then there was the matter of getting the seam straight on your leg.

Full-fashion stockings came in sizes 8.5-10, which considered the shoe size and leg width. They tended to bag at the ankles because the thread had no elasticity, and stockings were overcut to get your foot through the ankle.

As dresses became shorter in the 1920s, it was simply unheard of for a woman to leave the house without a leg covering. (Pants were not an option.)

Stockings were typically of silk or rayon. Rayon, introduced in 1917, was the first manmade silk substitute made from the inner bark of the mulberry tree. A mix of silk or rayon and cotton supplied the best of both materials and the longest stocking wear.

Fishnet stockings revealed too much leg for most women. In the 1920s, they were worn only by showgirls and those especially naughty flappers.

Flappers were also known to apply a little leg makeup to their bare knees to tease men with a risqué glimpse of skin.

In 1930, the DuPont Company created nylon, the first synthetic fiber made entirely from chemicals. DuPont touted its new fiber as being “as strong as steel, as fine as a spider’s web” and introduced it for fishing line, toothbrush bristles, and surgical sutures.

Nylon and nylon stockings were shown to the American public at the 1939 New York World’s Fair. Women loved them!

In 1937, Louis Goldschmidt, a German sock maker, invented a fine-gauge knitting machine to create a circular sock. They were shaped by pressing them on a form. Women soon had a tubular stocking with no seams.

In 1942, nylon went to war, replacing the Japanese silk in parachutes and tents. Nylon factories were repurposed to produce wartime necessities. Bare legs were still unacceptable, so women used a leg makeup to stain their legs and drew leg seams with an eyeliner pencil to give the impression they were wearing highly prized stockings.

In the 1940s, Dunlop chemists (the tire people) developed Lastex, thin strands of rubber wrapped in cotton threads. Girdles made of Lastex made them great for firming but hot, as rubber does not breathe.

In 1949 DuPont created a type of stretchy polyurethane fabric trademarked under the name Lycra. It was also referred to as Spandex or elastane and was introduced in bras and girdles in 1959.

Panti-Legs were introduced in 1959 and took hold in the ’60s with the popularity of the miniskirt. Pantyhose made girdles unnecessary.

The “control top” previewed in 1970. Pantyhose became a staple in every teen girl and woman’s wardrobe. Sales expanded as more women headed into the workplace.

Manufacturers marketed new colors and textures, but the glory days of stockings came to an end in the 1990s. Women were wearing pants with trouser socks, and the casual fashion styles had arrived.

Exposed skin is the norm today. The hosiery life cycle now features the footless Spanx leg coverings that incorporate Spandex. What will be next? 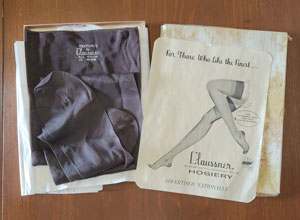 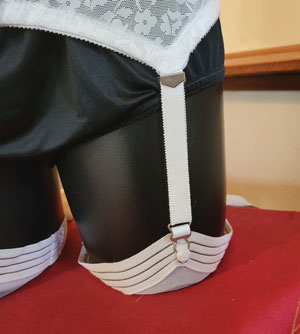 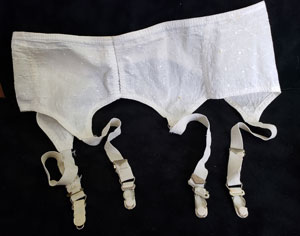 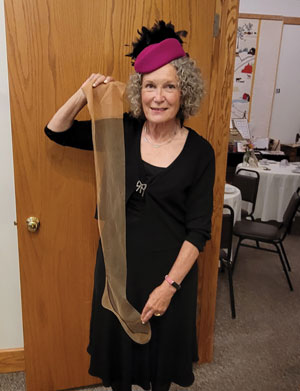