Do you recall the series of six red advertising signs along the country highways?

In 1925, Clinton Odell and his brother, Allan, installed these sequential road signs to market Burma-Shave, a brushless shaving cream. In the early 1920s, their father had started the Burma Vita Co. to manufacture and sell a liniment for pain.

Unsuccessful with liniment, he enlisted a chemist, Carl Noren, to create a brushless shaving cream. The 143rd formula, when aged, resulted in a stable cream that supplied a fine shave. He called it Burma-Shave.

Selling a brushless shaving cream required men to give up their badger-hair brush and shaving mug, a time-honored barbering tradition. Burma-Shave touted convenience, especially when traveling. You didn’t have to pack a wet brush that would mildew and smell. It was faster to use and “modern.”

Allan Odell proposed a set of signs to promote Burma-Shave. With $200, he bought used boards, sawed them into 36-inch lengths, and painted them red with 4-inch white Gothic letters. A five-sign jingle was followed with Burma-Shave on the sixth sign. 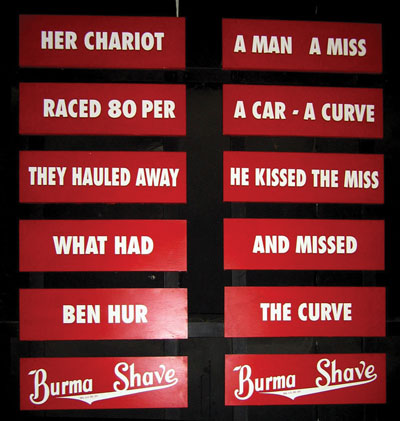 Orders from the drivers on these roads started coming in.

The jingles used a mix of folk humor and wit, wordplay and pun, slang and colloquialism. The corny humor was much needed in the post-Depression era.

The public associated the comfortable style with friendly business folks. Initially written by the Odells, by the 1930s, the jingles were selected from entries to annual contests that paid $100 for selected jingles.

These jingles are excerpted from The Verse by The Side of the Road: The Story of the Burma-Shave Signs and Jingles by Frank Rowsome Jr., printed 1965-1972.

HIS FACE WAS SMOOTH

AND COOL AS ICE

Burma-Shave themes were flirty-but-clean sex themes with many boy-girl jingles.

HE HAD THE RING

HE HAD THE FLAT

BUT SHE FELT HIS CHIN

Other themes were public and highway safety and preventing forest fires. Often the theme admonished one to avoid substitute brands.

THE TOE OF YOUR BOOT

Burma-Shave signs expanded across Minnesota, Iowa, and Wisconsin in 1926. Ultimately, over 7,000 sets were posted across 43 states.

Only four states were without official signs. Arizona, Nevada, and New Mexico didn’t have enough traffic, and the roads in Massachusetts were considered too windy, and heavy foliage blocked the view of the series.

Initially, the red/white signs were alternated annually with orange signs with black print. Surveys showed no one recalled the orange/black signs. The red/white prevailed, saving money on steady replacements across the country.

SHOOT THE BRUTE SOME

At their peak, Burma-Shave was the second-highest-selling brushless shaving cream in America. The road signs had worked in the 1930s-1940s, perhaps because of the lighthearted and often corny humor. It was a novel and captivating approach to advertising.

By the late ’40s, the heyday of Burma-Shave signs was over. What happened? Certainly, highways and interstate roads diverted the traffic patterns, with fewer folks driving the country roads.

But ultimately, TV reached more people and could quickly tell the story of your product. The corny signs could not compete.

Burma Vita Co. explored print, radio, and TV marketing but announced a sale to Philip Morris, Inc. in 1963. It became a division of American Safety Razor Products, who shifted marketing dollars to TV. The classic signs and manufacturing ended in 1966. (In the 1990s, the nostalgic Burma-Shave brand was reintroduced with a line of shaving cream, razors, and accessories.)

The Burma-Shave signs impacted whole generations of country drivers. What are your memories?