Bobbin lace was the preferred needlework in the 1700s. It was made by nuns using silk or linen thread on multiple spindles to create complex patterns. In 1806, Napoleon’s blockade on the English Channel stopped the shipments of silk thread from the East.

During this time, brothers James and Patrick Clark were running a loom equipment and silk thread business in Scotland. In response to the loss of silk trade, Patrick Clark created a method of twisting cotton yarns together to produce a four-cord thread.

It was so strong and smooth that it could be substituted for silk and linen for hand sewing. Cotton was readily available and could be salvaged from existing fabric. This change in thread made needlework affordable.

The invention of the spinning jenny (James Hargreaves, 1770) and the cotton gin (Eli Whitney, 1774) made machine-spun cotton thread widely available and inexpensive in Europe and North America.

Crocheted laces use more thread than woven bobbin laces, but the crocheted laces were faster to make and easier to teach. By the 1800s, crochet was popular as a less costly substitute for bobbin lace.

During the Great Irish Famine (1845-49), nuns taught local women and children to crochet. Pieces were shipped across Europe and America, bought for their beauty and for the charitable help supporting the Irish.

Crochet became a thriving cottage industry, particularly in Ireland and northern France, supporting communities whose traditional livelihoods had been damaged by wars, changes in farming, and crop failures.

At the time, crochet was disdained by the rich as a cheap copy of older laces. Queen Victoria conspicuously bought Irish-made crochet lace and even learned to crochet herself to promote the acceptance of crochet.

During the late 1800s, the preferred colors were white, cream, and ochre (light brownish-yellow). Godey’s Ladies Book, a pioneer woman’s magazine along with others, published patterns for the homemaker. Women formed clubs to share the cost of a subscription. The magazine was then passed from member to member.

In the 1920s, America was changing from the conservative Victorian Era to the Modern Era in fashion, home furnishings, and lifestyle. There was an evolution in crochet patterns and colors as well. Historically the patterns were more elaborate and involved, but women were enamored with the quick and easy patterns of the new times.

During the period 1900-1930, crochet was an economical means to create linens, dainty laces for lingerie and collars, yokes for nightgowns, and baby clothes.

Crochet pieces adorned homes with pillowcases, armchair covers, and bedspreads. Doilies and dresser scarves were intended not only to decorate, but also to protect furniture from scratches.

The five original variegated threads were introduced in the 1940s: the classic blue, purple, green, pink, and orange. One can date pieces in these variegated colors from 1940 to 1960.

After World War II and into the early ’60s, there was a resurgence in interest in home crafts. New and imaginative crochet designs were published for colorful accessories, potholders, and other home items. Even Barbie dolls were dressed in crochet gowns. These uses called for thicker threads and yarns, and multiple variegated colors were introduced.

The craft remained primarily a homemaker’s art until the late ’60s through the 1970s, when my generation embraced crochet with “granny squares,” a motif worked in the round that incorporated bright colors of yarn for bedspreads, shawls, and pillows.

Since this time, crochet has declined in popularity. The 21st century has seen a renewed appreciation for women’s handicrafts, perhaps more as women’s textile art than for the utilitarian uses of the past.

It has been my observation that the treasured pieces from our mothers and grandmothers live in the back bedroom in a dresser drawer. For the children and grandchildren, “out of sight” suggests they have no value.

I beseech you to open the drawers and bring out your “stories.” Frame a piece. Use the fancy pillowcases and put the bedspread on the bed! Celebrate them as the material documentation of women’s lives speaking through thread. 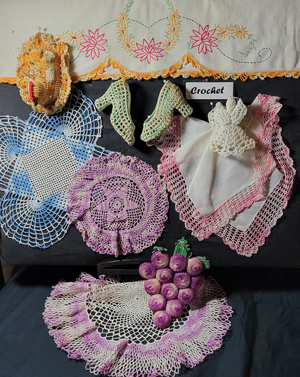 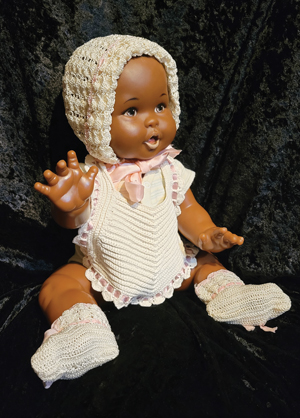 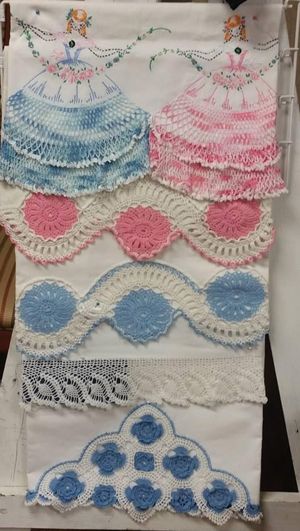 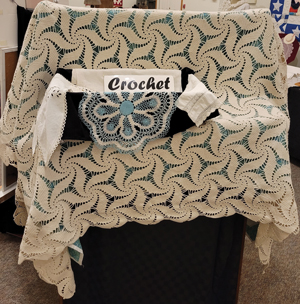