Do you remember the early dresser sets with the comb, brush, mirror, and the matching bowl with a hole in its flat lid? In the Victorian era, this hair receiver bowl was kept on the dressing table to store hair removed from brushes and combs.

Victorian women had much time on their hands with few raw materials available. Human hair art, called “hairwork,” became popular as a way of expressing sentiment and affection. It was much like saving a lock of hair from a child’s first haircut today.

Hair was recycled and crafted in one of several ways:

By the mid-1800s, hairwork became a parlor craft among middle-class white women. The long hair strands were wrapped around a thin wire. They could then be braided into detailed jewelry, wreaths with delicate floral designs, or arranged under glass in popular brooches.

Beads, buttons, and sometimes seeds could be incorporated. Wreaths were typically formed into horseshoe shapes, a Victorian symbol of good luck. Hair pieces were given as gifts to friends and loved ones as keepsakes.

Hairwork was often shared at funerals because hair was a tangible part of the loved one. In this era, photography was still in its infancy, and photos were a rarity. Human hair can keep its color and does not decay. If properly cared for, hair will remain stable, making it sustainable for centuries.

In 1861, when Prince Albert died, Queen Victoria plunged herself into deep, lifelong mourning. She made mourning fashionable and recognizable. A woman in a black crepe dress and veil signaled a household in mourning, and a woman in mourning black gained more respect.

These cultural mourning practices became widely practiced by the English middle classes. Queen Victoria’s children and grandchildren were given jewelry made from her hair. Napoleon had a watch chain made from his wife’s hair. 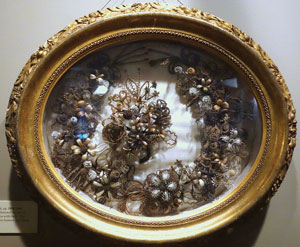 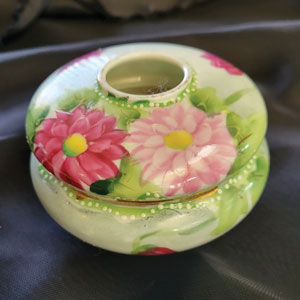 Today, we would describe this as a way of grieving and accepting the death. It was the Victorian way of remembering their loved one.

Mortality rates in the 1800s were much higher than today. In the U.S., hair jewelry was vogue after the Civil War, which had left millions of grieving families. The deaths fostered a general mourning culture. Hair jewelry was popular because it was “decent” enough to be worn during mourning.

Hairwork fell out of favor with the outbreak of World War I. The economic hardships, Spanish flu pandemic, and patriotic volunteering efforts shifted the emphasis away from over-the-top mourning and rituals.

The advent of funeral homes moved death out of the home. There were also changes in fashion styles and new theories about hygiene.

In the early 1900s, hair jewelry could be ordered from Sears & Roebuck Co. Today, hair wreaths and pieces can be found at antique stores, at estate sales, and in a few museums. Their value continues to increase, with prices from a few hundred to several thousand dollars, depending on the size and condition.

Hairwork is now regarded as “hair art” that documents the way Victorian women regarded love and loss, a story of life and death rarely told. It also explains the hair receiver bowl in Victorian-era dresser sets.

Hairwork pieces can be viewed online to appreciate their amazing intricacy.