As we celebrate Presidents Day, it is a good time to consider some of their famous last words — many remained philosophical and elegant in their final moments.

While historians agree on the last words of some presidents, they strongly disagree on others. Thus, their last words may have changed since you learned them in school. I consulted History.com and other reliable websites for the famous last presidential words below.

The last words of George Washington, who lived to be 68, were uttered at Mount

Jefferson, third president, died at Monticello in Charlottesville, Virginia, on July 4, 1826. On his deathbed, Jefferson’s last words were: “This is the Fourth of July.” Some historians assigned even loftier words to Jefferson, including: “I resign my spirit to God, my daughter to my country.”

Benjamin Harrison, our 23rd president, died on March 13, 1901, in Indianapolis, Indiana. His last words: “Are the doctors here? Doctor, my lungs.” Harrison died at age 67 of pneumonia.

Franklin D. Roosevelt served as our 32nd president. He was the only president elected for four terms. In 1945, Roosevelt died in office at age 63. His last words, uttered at The Little White House in Pine Mountain, Georgia, were: “I have a terrific pain in the back of my head.”

The last words of Andrew Jackson, seventh president, who died June 18, 1845, at age 78, were uttered at the Hermitage in Nashville, Tennessee. “I hope to meet you all in heaven. Be good children, all of you, and strive to be ready when the change comes.”

Historians long believed Jackson died of heart failure. In 1999, scientists determined he died of lead poisoning, likely from bullets lodged in his body from duels.

President Millard Fillmore, our 13th president, died March 8, 1874, age 74, in Buffalo, New York. As he was being fed soup in bed, Fillmore said: “The nourishment is palatable.”

James Buchanan, 15th president, died at Wheatland in Lancaster, Pennsylvania, on June 1, 1868, at age 77. His final words: “O Lord Almighty, as thou wilt.”

The last words of Theodore Roosevelt, 26th president, who died at age 61 on Jan. 6, 1919, were: “James, will you please put out the light.” James was his valet. It is believed Roosevelt died of a blood clot to his lungs.

The last words of William McKinley, who died in Buffalo, New York, on Sept. 17, 1901, were from the hymn “Nearer, My God, to Thee,” according to some historians. McKinley was the 25th president.

Through war, peace, and hard economic times, perhaps all presidents “tried so hard to do right.”

James E. Patterson is a Washington, D.C.-based writer and speaker. 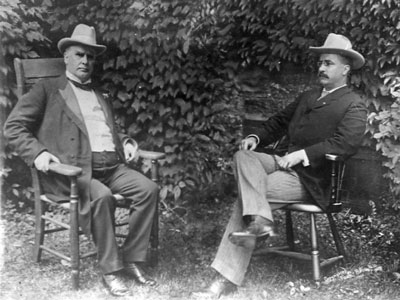