Cleopatra colored her lips with red dye from the crushed shells of the cochineal bug, which is still used today to make carmine, a red food coloring. 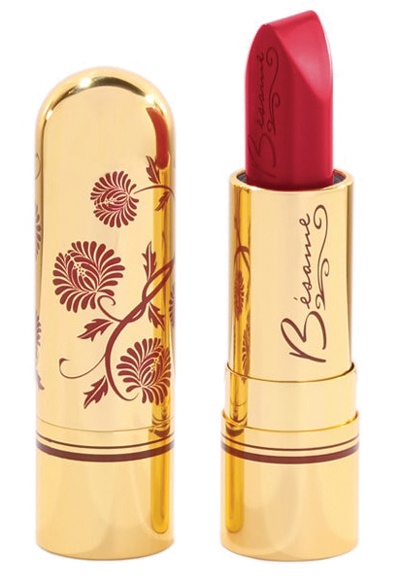 In ancient Greece, it was mandated that prostitutes wear red lip pigment, lest they be confused with respectable women. Their lipstick was made with red dye, sheep sweat, and crocodile droppings!

In the 1500s, Queen Elizabeth I wore red lipstick for her signature look: an alabaster-white powdered face, plucked eyebrows, and a receding hairline, which was the definition of beauty at the time.

In the 1700s, cosmetics were outlawed in England on the basis that women were using cosmetics to seduce men into marriage. Women could be charged with witchcraft and the marriage annulled. The seduction list included red lipstick, perfumes, paints, cosmetic washes, artificial teeth, false hair, iron stays, hoops, high-heeled shoes, and bolstered hips. Imagine!

In mid-1800s, England’s Queen Victoria declared cosmetics “improper, vulgar, and acceptable only for use by actors”; thus, women who wore cosmetics were considered “painted ladies,” or prostitutes.

French perfumers in 1884 created the first commercially produced lipstick from deer tallow, castor oil, and beeswax. It was discretely packaged in paper or in paper tubes.

The use of cosmetics remained underground into the early 1900s, when American suffragettes like Charlotte Perkins Gilman and Elizabeth Cady Stanton began to publicly wear bright-red lipstick. Their primary purpose was to shock men, who considered it sinful and sexually amoral.

In 1912, Elizabeth Arden Cosmetics distributed thousands of metal tubes of red lipstick to the marching suffragettes in New York City and beyond. Red lipstick was quickly adopted as a sign of rebellion and liberation. The flappers of the 1920s continued the tradition by flaunting their red lips.

In the 1930s, Hitler’s Nazi party decreed that a “wholesome, clean, and fresh-face” look defined the ideal German woman, while in Allied countries, wearing red lipstick represented strength in femininity.

In 1941, at the urging of First Lady Eleanor Roosevelt and Gen. George Marshall, the Women’s Army Corps was created. Elizabeth Arden was commissioned to create a regulation lipstick for these servicewomen.

Arden introduced Montezuma Red, a bright, vibrant red perfectly matched to the red piping and chevrons on women’s military. Montezuma Red was issued in an official kit that included the red lipstick, a matching cream rouge, and nail polish.

To respond to civilian women, Elizabeth Arden created Victory Red, so any woman could proudly honor her country. Other lipsticks had names like Fighting Red, Grenadier Red, and Patriot Red.

As a public service notice, the current 1938 federal cosmetic regulations do not require U.S. manufacturers to show their ingredients. Concerns about contaminated makeup appeared in the 1980s.

Lipstick and lip gloss hold a mixture of petroleum-based chemicals, often untested for safety. An FDA study in 2010 found lead in 400 lipsticks, including high levels in some American-made brands.

Toxic chemicals in some lipsticks include methylparaben, polyparaben, retinyl palmitate, synthetic dyes from aluminum or petroleum products, and tocopheryl acetate.

Over 80% of American women wear lipstick or lip gloss. It is estimated that women who use lipstick daily involuntarily eat around 4 pounds of lipstick in their lifetime.