The History of Ordinary Things: The Multiple Sources of Multipurpose Gelatin

Gelatin has been a silent ingredient in our food since the Middle Ages. For the castle lifestyle, gelatin was used to create jelled dishes flavored with vinegar, wine, almond extract, and such to produce a tart rather than sweet flavor. The foods to be glazed were more often meats than sweets.

The “glue” in gelatin, called collagen, was laboriously extracted from meat bones; think of the gelatinous layer when you cool a boiled ham bone. The collagen was derived primarily from pork skins, cattle and pork bones, or split cattle hides.

Contrary to popular myth, horns and hooves are not used, and no horses are involved. In the Middle Ages, deer antlers were a popular source of the collagen, and later, calves’ feet and knuckles. Housewives in the 19th century used isinglass, made from the membranes of fish bladders.

Gelatin-making was a daylong affair, requiring the tedious scraping of hair from the feet, hours of boiling and simmering with egg whites to degrease and clarify the broth, and careful filtering through jelly bags or “filtering stools.”

The finished product was then dried into sheets, leaves, or rounds that needed a long soaking before it could be used. This gelatin was a translucent, colorless, odorless, brittle, and nearly tasteless substance.

In 1890, Charles Knox developed the world’s first pre-granulated, unflavored gelatin, marketed as KNOX. His wife, Rose, developed hundreds of recipes that were printed on KNOX packages and leaflets and in illustrated cookbooks.

In 1885, Pearle Wait, a LeRoy, New York, carpenter and cough syrup manufacturer, purchased an unused patent for powdered gelatin. His wife, May, added sweetener and the four original fruit flavors of strawberry, raspberry, orange, and lemon. May named the powder Jell-O.

Unable to successfully market their product, in 1899, Wait sold the business to his neighbor, Orator Francis Woodward, for $450. By 1902, Woodward placed advertisements in the Ladies’ Home Journal proclaiming Jell-O to be “America’s Most Famous Dessert.”

By 1904, his company, Genesee Pure Food Co., was sending salesmen across the country to distribute free Jell-O cookbooks directly to housewives, a pioneering marketing tactic at the time.

Today gelatin is used as a gelling agent in foods like trifles, aspic, marshmallows, and confectioneries, such as Peeps, gummy bears, and Jelly Babies. It can be found in jams, yogurt, cream cheese, and margarine. It is also used in pharmaceuticals, photography, and cosmetic manufacturing.

For decades, gelatin was touted as a good source of protein, said to strengthen nails and hair. There is little scientific evidence to support such an assertion.

Jell-O has tried, and retired, many flavors, including celery, mixed vegetable, Italian salad dressing, and spicy tomato for use with vegetable dishes (1964), as well as chocolate (1906), coffee (1918), and cola (1942). Today, strawberry is the most popular flavor, followed by orange and berry blue.

Jell-O pudding pops were introduced in 1982. In 1990, Jell-O Jigglers transformed Jell-O from a funeral dinner salad into a kid’s snack food.

Today, Kraft claims Jell-O to be the world’s most popular prepared dessert, selling over 300 million boxes every year: nine boxes every second. Of course, there are multiple other manufacturers as well.

Gelatin has evolved, and perhaps guided, our eating choices while adding fun to our food. Harken back to the 1964 jingle, “There’s always room for Jell-O!” It remains true today. 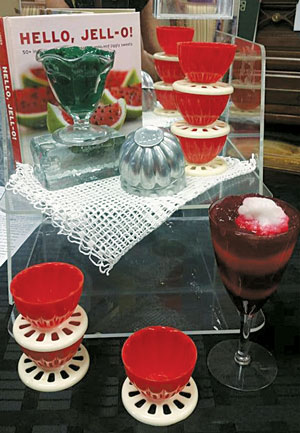 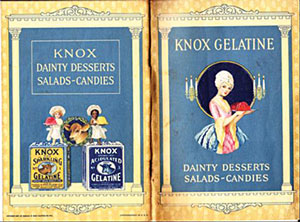 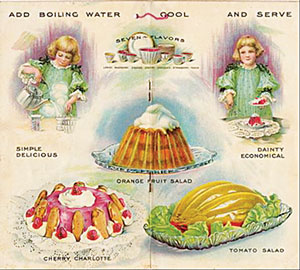