The History of Ordinary Things: The Egg Carton & Other Egg Tidbits

As Americans moved off farms and into cities some 100 years ago, our source of eggs shifted from the henhouse to the grocery store.

In the early 1900s, farm wives (typically) raised a chicken flock for their families’ egg use, selling the extra to grocers. Referred to as the “egg money,” it created a regular source of income to buy the items they could not produce on the farm. Some egg farmers had flocks as large as 400.

The eggs were collected in wicker or wire baskets, but these were neither stackable nor sturdy as the eggs bumpety-bumped aboard trains and carts into the cities. Transporting the fragile eggs to markets posed a special problem. In 1910, a U.S. Department of Agriculture (USDA) report estimated that breakage and spoilage cost $45 million annually.

Soon inventors and tinkerers were competing for solutions to hold and carry whole eggs. Farmers took bulk eggs to town in egg crates using flats and individual separators. Women would bring eggs home from the grocer using their own homemade wooden egg boxes.

In 1911, British Columbian newspaper editor Joseph Coyle invented the egg box with the separation of eggs into individual snug compartments created with folded cardboard. The cardboard holder was hand glued into the container until 1919, when Coyle designed a machine to make the egg boxes.

In the ensuing 50 years, inventors filed dozens of patents for egg containers. In 1913, Popular Mechanics reported on the “Egg Crate for the Coat Pocket,” which targeted commuting businessmen bringing home eggs (along with the bacon). Two years later, the big innovation was the asbestos carton!

The egg carton was further developed by H.G. Bennett (U.K.) during the 1950s. His carton had a dimpled, cup-like bottom, each holding an individual egg. This design, still in use today, successfully protects eggs against stresses during transportation by absorbing shock.

Today, egg trays are used by processors. In some commercial operations, the eggs are cracked and transported to manufacturing sites as raw, liquid eggs.

Today’s egg carton can be made of various materials, including foamed plastics, such as polystyrene foam or clear plastic, and may be manufactured from recycled paper and molded pulp by means of a mechanized papier-mâché process.

Although most people are familiar with cartons holding a dozen eggs, there are various sizes, with some designed to hold two (yes, two), six, eight, 10, 15, 18, or 20 eggs. 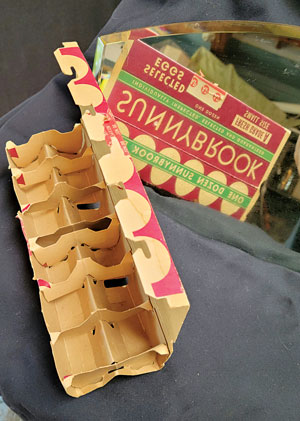 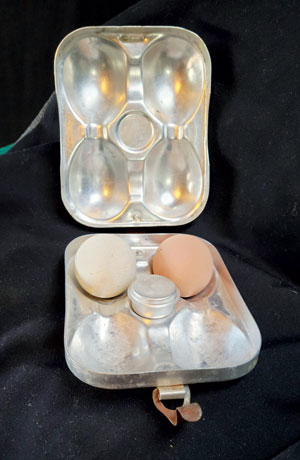