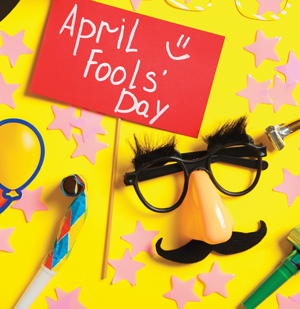 The April Fools’ Day tradition has been around since at least the 15th century (with a possible reference to it appearing in Geoffrey Chaucer’s The Canterbury Tales), and the question of how it began has been asked almost as long.

A letter to the British magazine Apollo in 1807 wondered, “Whence proceeds the custom of making April Fools?”

The usual explanation involves the calendar. The Julian calendar began the new year on March 25, and festivals celebrating it were typically held on April 1.

When the world began changing over to the Gregorian calendar, which places New Year’s Day on Jan. 1, pranksters sometimes tried to fool their friends and neighbors into thinking that April 1 was still the first day of the year.

In the 18th century, some believed that April Fools’ Day dated back to the days of Noah and the flood. A newspaper article published in 1789 suggested that Noah sent the first birds off to look for land too soon and that he launched them on the first day of the Hebrew month corresponding with April.

Coincidentally, in 1933 a newspaper in Cologne ran a story about the discovery of Noah’s Ark by an expedition sponsored by the “Royal Yalevard University” in Massachusetts, led by “Professor Mud” and “Professor Stoneass.”

The story appeared on April 1; on April 8, the paper admitted the joke, but other publications printed the story as if it were genuine.