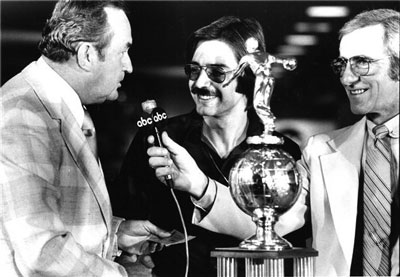 While it may seem inconceivable today, there was a time when bowling dominated Saturday-afternoon television.

The Professional Bowlers Association Tour on ABC-TV, which aired from 1961 to 1997, was a popular staple for most of its 36-year run. It owned the 3:30-5 p.m. time slot and was followed by ABC’s Wide World of Sports.

How dominant was the bowling program? As late as 1983, it outdrew the NCAA’s Hula Bowl, the semifinals of the NCAA basketball tournament, and the third round of the PGA Masters tournament.

Bowlers such as Earl Anthony, Mark Roth, Marshall Holman, Johnny Petraglia, Steve Cook, and others were idols for millions of viewers.

Of course, it was the time of only three network stations and no cable television.

Watching the PBA Tour on ABC-TV was a fond memory for many area bowlers.

“Everyone I knew watched bowling on Saturday afternoons,” said Joe Andreone, 67, of New Freedom, who starting watching the television competition in the early 1960s. “Whatever happened on Saturday was a big topic among bowlers the following week.”

Andreone said he improved his bowling by watching the pros, listening to the color commentators, and paying attention to the weekly bowling tips.

“When I was growing up, you bowled in the junior league on Saturday morning and watched the PBA on Saturday afternoon,” said Mike Wolfrom, 60, of York. “Watching the PBA motivated me. It made me want to go bowling right after that. If watching the PBA didn’t pump you up, nothing would.”

Wolfrom said he was fortunate to watch the PBA Tour in the 1970s and 1980s, which he termed bowling’s “golden era.”

Dane Slenker, 65, of York, said the PBA Tour on ABC was “the highlight of the week,” and he tried not to miss it.

“I wanted to emulate the PBA bowlers. I wanted to be as good as they were,” Slenker said. “I found out, however, that they made it look easier than it is.”

“I loved watching bowling with my father, who was a league bowler,” he said. “It was a bonding experience for us. The PBA Tour was my only way to connect with bowling and its stars. I definitely looked forward to it every week.”

The first chink in the PBA armor occurred in 1985, when viewership for the PBA Tour dropped by 5 million viewers and a record low in its 24-year history. Reasons cited for the dip included a decrease in overall television viewership and a change in the starting time from 3:30 p.m. to 3 p.m.

Despite the decline, it remained the highest-rated show in its time slot. Its downward spiral, however, had begun.

In 1996, the PBA Tour was bumped from its traditional January-through-April slot and moved to March-through-May. Predictably, the overall result was a dramatic decrease in viewers.

Near the end, the PBA Tour was perceived as a weakling by advertisers, who sought a younger demographic. Nielsen rates had slipped to a 2.0, meaning that 2% of homes nationwide that had a television set watched on a typical Saturday. This was compared to a 9.0 rating in the mid-70s and a 5.8 rating in the mid-80s.

Today, the PBA on Fox draws a fraction of the viewers it did in its heyday on ABC. The 2019 PBA Tournament of Championships attracted 1.1 million viewers, which was 75% more than the tournament attracted the year before on ESPN.

Although the PBA Tour will never return to its halcyon days, any increase in viewership is encouraging.

Barry Sparks is the author of EARL: The Greatest Bowler of All Time.