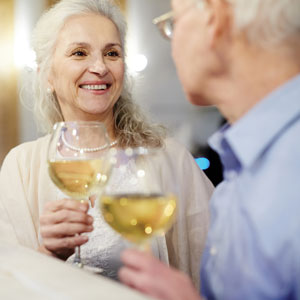 Margaret, a 65-year-old single woman, is puzzled about a man she spent time with who didn’t ask for her phone number.

Margaret emailed, “A couple weeks ago, two girlfriends and I went for line-dancing lessons to a well-known country and western bar. I arrived early.

“A few minutes later, two men sat down at the table next to me and started a conversation. I was attracted to the man sitting closest to me (I’ll call him ‘John’). He and I chatted for 2.5 hours, and I even skipped one of the line-dancing lessons as we were engaged in an interesting conversation about a ranch property he had just purchased in the country.

“He had lived in my city for 25 years before moving to a nearby city. He owns his own company. He spends weekends at his ranch property. He wore no wedding ring. As he was flipping through pictures on his phone of his ranch property to show me, I didn't see any pictures of him with a woman.

“He offered to buy drinks and food for me and my friends, which I thought was very generous. We had already eaten. He bought a glass of wine for me and sodas for my friends. He helped move our table a little so my friends would have some space to sit and helped me lower a window blind that was stuck with sun streaming into my friends’ eyes. Very chivalrous of him.

“All of his qualities I found attractive, as well as his physical appearance. I guess his age to be close to mine, in his mid-60s. His friend kept urging him to dance with me, but he had informed me early in the conversation he did not line dance.

“That was one of the strangest experiences I’ve had with a man to whom I was attracted, and I certainly got the vibes that ‘John’ was attracted to me. My ego was a little hurt because he didn’t ask to call or see me again.

“He wasn’t shy, as he initiated the conversation with me as soon as he sat down.

“I haven’t gone back to that bar since this happened but will go sometime.

“What should I have done?”

I responded, “The best thing would have been to give him your contact information. You need to carry preprinted calling cards that show your first name, possible photo, and phone number. Before leaving, you could have handed a card to him and said: ‘I’d enjoy seeing you again; here’s how to reach me.’

“Or, you could have written your phone number on a cocktail napkin.

“Who knows if you will see him again? If not, it wasn’t meant to be. But, in the future, be prepared to hand over your calling card if a similar situation arises.”