Q. How do I make the text on my phone larger?

A. The good news is that both iPhone and Android have system settings to make text larger, and many apps support adjustable-size text based on these settings.

The less-good news is that these settings appear in multiple places, and they have different effects. Read on for some general suggestions, but I encourage you to search the web for detailed advice about your specific device.

Not all text on a phone is the same. Labels are text. So is scrolling text in an email. Action items, such as notifications and menus, contain text as well.

On both iPhone and Android, open “Settings,” and open the “Accessibility” option, and then look for a menu choice like “Font Size” or “Larger Text.” These controls will get you started in the right direction.

On Android, text in the Chrome web browser has its own control under the three-dot menu in the upper right of the screen. Tap it, and then tap “Settings,” followed by “Accessibility” and “Font Scaling.” 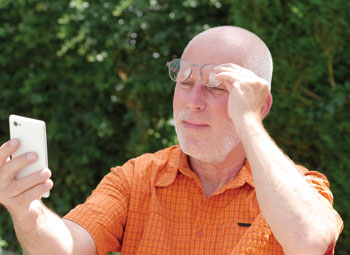 On Apple, the Safari text is a small button next to the URL marked with “AA” that reveals a menu to change text size.

One side effect of larger text is that other items on screen have to adapt. Make the text too big, and other screen elements might be pushed off the screen. There is a balance to strike between readability and usability.

Once you find the correct size for you, the experience of using your phone will be much more comfortable.

Q. How can I make my phone screen easier to see? Sometimes I cannot tell where I should tap.

A. Modern smartphones are smart enough to accommodate our individual differences in a number of ways. Options range from increases in text size, to contrast and color refinements, to voice-based interfaces usable by people with severely impaired vision.

All of these options are managed in device “Settings,” grouped under a menu titled “Accessibility.” There are a considerable number of choices under that menu. Simply knowing what they are and what they do is useful.

In addition to text-size adjustments, there are two other notable features worth exploring.

The first is system-wide screen enlarging. It works similar to a zoom gesture on a photo, except that it magnifies the entire screen. It takes practice to manage zooming along with screen taps and scrolling regions, but it can make a huge difference in usability.

To enable it, look under “Accessibility” for an item called “Magnification” on Android and “Zoom” on iPhone.

The second is increasing contrast. This feature is more useful on iPhone because it changes elements like buttons and borders to make them more clearly defined. Android has a similar option, but it only applies to text.

Every year smartphones become smarter at adapting to us. And accessibility features are key to making the most personal computing devices ever even more personal.

Q. Can I use my smartphone like a magnifying glass?

A. Absolutely, yes! I first wrote about this capability on iPhone a few years ago, but the feature has improved since then, and it has come to Android as well.

The “Magnifier” app comes preinstalled on iPhones, and the “Lookout by Google” app is available from the Google Play Store. Both apps have similar features.

For iPhone users, this feature is as simple as activating Siri and saying “open Magnifier.” It can also be opened by tapping the Magnifier app in the utilities folder or in the Control Center.

There is a slider at the bottom of the screen to adjust the magnification. If you tap just above the slider, a tray will slide upward to reveal secondary controls, which include a snapshot button, contrast and color adjustments, and a flashlight.

Snapshots allow you to store a quick image so you do not have to hold the camera for more than a few seconds. This is especially handy for grabbing images in awkward-to-reach places. Use the two-finger zoom gesture to enlarge the parts the snapshot you wish to read.

The Lookout app for Android is a gem. Alongside the ability to magnify, it has special modes for tasks like reading a document aloud and deciphering nutrition labels.