But this stout artilleryman survived the war and earned numerous decorations for his valiant service, including the Army Commendation Medal, the Purple Heart, and a Presidential Unit Citation.

Foor comes from a military family. He had 21 direct relatives who served in the Civil War, eight of whom paid the ultimate sacrifice.

His father served in the Army in Africa and Europe for almost the entire duration of World War II and helped liberate the concentration camp in Landsberg, Germany.

But like many World War II veterans, “He didn’t tell me a lot of stories about the war,” says Foor.

Foor grew up in in Manns Choice, Pennsylvania, and graduated from Bedford High School in 1966. Shortly thereafter he went to work for a U.S. Department of Agriculture research center in Beltsville, Maryland.

Foor had a 1A draft number, so he knew he would eventually have to go into the military.

“I thought, ‘Man, I’m not going to sit around thinking about that for the next six, eight months or whatever.’ I decided to get it over with.”

So he went to a recruiting station in Altoona and signed up for a two-year enlistment in the Army.

On June 24, 1968, he traveled to the Pittsburgh airport to fly to Fort Jackson, South Carolina, for basic training. There, he met a fellow incoming soldier who would become one of his best friends: Jim Engelmeier.

“It was dead silence all the way to Fort Gordon,” says Foor. 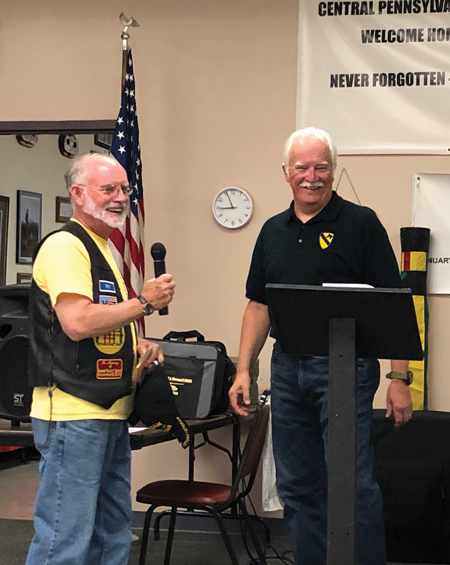 Foor enlisted at a time when casualties in Vietnam were mounting, so the armed services had to lower their standards for enlistees. Foor met soldiers who could barely read or write.

“All they were doing was looking for bodies. They just wanted people to fill the ranks,” says Foor.

He also recalls a renegade soldier punching a drill sergeant, which turned out to be a big mistake. A group of drill sergeants came out and beat the guy up so badly that his face was a bloody pulp. That was the last time they ever saw him.

Foor later traveled to Fort Sill in Oklahoma for artillery training. There, he learned how to fire a variety of howitzers.

“Fort Sill was nice because they treated you almost like you were a human being,” he recalls.

After a 30-day leave back home in Bedford, he flew to Fort Lewis, Washington. Coincidentally, his buddy Engelmeier from basic training took the same flight.

After turning down an opportunity to flee to Canada with three fellow soldiers who went AWOL, Foor flew to Hawaii, then Guam, and then to Bien Hoa Air Base, near Saigon.

“I remember walking off that plane and as soon as that door opened, it smacked you in the face. The heat and the stink. I remember diesel fuel smells and garbage. Every time I smell that, it takes me back to that time,” says Foor.

Foor spent his first few weeks shuffling between bases. But he was eventually choppered into Landing Zone Clara, west of Saigon.

“I was walking off the pad up to the guns and I heard this guy yelling at me. I thought, ‘Who the heck is that?’ Here’s that Engelmeier again. We ended up in the same outfit again. That is a one-in-a-million shot,” he recalls.

On Dec. 29, the North Vietnamese Army battered LZ Clara with rockets and mortars. Foor was getting ready to return fire when a mortar round exploded about 15 feet away, spreading shrapnel that entered Foor’s chest, neck, arm, and leg.

Foor was wearing a flak vest, which he credits for saving his life. The shrapnel penetrated his chest but didn’t go far enough to kill him.

Foor was medevacked to a hospital in Cu Chi, where he spent several days recovering. He recalls one incident when a severely wounded man helped him make his blood-stained bed.

“You could see his stomach and there was plastic covering the area. You could look in there and see stuff, whether it was intestines or whatever. I said to him, ‘What happened to you?’ He said, ‘I’m waiting for my abdomen to drain and then they’re going to sew me up.’”

Foor was transferred several days later to a hospital at Cam Ranh Bay, where he stayed for nearly six weeks. There, he met the famous actor Jimmy Stewart, who was also from Pennsylvania.

After Foor recovered sufficiently from his wounds to go back into the field, he first went to LZ Elrod and then LZ Lois. On March 17, 1969, Lois got hit hard with rocket-propelled grenades, and two howitzers were taken out of action, the only time Foor’s unit lost a gun to enemy action during his year in ’Nam.

On May 10, Foor was stationed at LZ Phyllis when it was attacked by mortars and rockets. Infantrymen made a sweep around the base and found a cache of weapons. Following orders, they loaded the ordnance onto a jeep trailer and drove it into the LZ.

Two days later, after a second enemy attack, another infantry sweep produced another cache of weapons that was also brought into the LZ. Something caused the entire pile to blow up, killing 11 men and wounding 10 others.

“I hope somebody got court martialed for allowing that ordnance to come on the base. That was a travesty and a tragedy,” says Foor.

After intelligence suggested a major attack was coming on LZ Phyllis, Foor was evacuated first to LZ Cindy then to LZ Joy. The NVA launched a heavy ground attack on June 12, and sadly, Jim Engelmeier was killed instantly when he was hit in the neck with small arms fire.

Foor’s unit was moved around from base to base over the next few months and fired many rounds supporting the infantry. He later went to Bu Dop, a Special Forces camp near the Cambodian border. There, he witnessed a Vietnamese woman giving birth to a baby girl in a bunker.

Foor recalls, “It was amazing, but I felt so bad for that kid being born into this time and in this hellhole. She was a pretty little thing.”

After returning from R&R in Taipei, Taiwan, Foor was asked to drive an officer to a nearby provincial capital. That officer happened to be Gen. Creighton Abrams, commander of all U.S. forces in Vietnam.

Abrams had a pocket full of cigars. Foor thought, “Please give me a cigar.” The general didn’t give Foor a cigar, but he thanked him for the ride.

Foor spent most of his remaining tour at LZ Westcott. He shot a lot of rounds, and as he points out, “The longer you stayed in a place, the worse the rats would get.”

On Thanksgiving, his battery commander and first sergeant told him that would be his last day in the field.

Flying out of the base that afternoon, Foor was allowed to follow a unit tradition by throwing a red smoke grenade out of the helicopter as he was flying away for the last time.

In early December, Foor flew to Hawaii and then Oakland, California. A day later, while leaving Oakland for San Francisco’s international airport, he encountered protestors for the first time.

“Why are they throwing rocks and eggs at us?” he thought. “We weren’t too much aware of what was going on in 1969.”

He returned home to Bedford to friends and family. He still had six months of service remaining, which he completed at Fort Stewart, Georgia.

Foor has enjoyed a successful post-military career, working for PPG Industries, then as a car salesman, and then 22 years in the postal service.

He has been married to Kim for 39 years, and the couple has a daughter, Shelley, who lives in Florida. He has traveled around the U.S. and Europe and loves riding his Harley-Davidson motorcycle.

But to this day, the war lingers on in Foor’s mind from shooting thousands of rounds with large guns.

“I have big-time tinnitus,” he says, “It’s been ringing in my ears every day since.”