Willing to Wander: Christmas around the World

Model boats are decorated with brightly glimmering lights. Women sprinkle water scented with basil around their house, which they believe will keep bad spirits away. Families dine on spit-roasted pork and fried pastry.

This is merry Christmas as it’s celebrated in Greece.

People around the world welcome this special day in a variety of ways, some familiar and others less so. These include festivities focused on Santa Claus and those that stress the Christ in the holiday’s name.

Given the seafaring history of Greece, it’s not surprising that decorated ships are an old tradition. In the past, small vessels were displayed in homes when sailors returned from sea voyages.

The kallikantzarol are described as roguish goblins that dwell underground and emerge during the 12 days of Christmas. While they have a reputation as naughty, some believers insist they’re actually impish and stupid.

Food often is a focus of Christmas merriment, and the list of typical fare is long and varied. Carp is the main dish at some holiday meals in Poland, and while some people buy a filet, others adhere to the time-honored way by purchasing the fish several days in advance, letting it swim in a bathtub, and then being dispatched when the time has come for it to be cooked and consumed.

Since Poland is largely a Catholic country, church attendance is part of the holiday observance for many people. Some also refrain from enjoying their favorite food and beverages in their effort to remember what they believe to be the real reason for Christmas.

Colonel Sanders would feel at home in Japan, where fried chicken at KFC and other fast-food restaurants is a holiday favorite. Other imports from the United States include exchanging cards and presents. Because most people are not Christian, Christmas in Japan is more like Valentine’s Day, a romantic time for couples to spend time together.

That contrasts with Germany, where the focus of celebration is the Advent; many families attend Mass on Dec. 24, and gifts are brought by the Christkind (child of Christ). Christmas trees have been used since the late Middle Ages. Most people have a real tree, which traditionally is decorated with wooden ornaments and real candles.

An impressive feature of holiday celebrations in Germany is the famous Christmas markets. Most cities have at least one, and some are based upon a theme, like angels or medieval times. The market in Frankfurt dates back to the 14th century, and the one in Cologne can attract more than 4 million visitors.

Some time-honored ways of celebrating Christmas were brought to Canada by German immigrants, along with people from France, Great Britain, Norway, and other countries. Given the cold winter climate, skiing, ice skating, and tobogganing are popular pastimes if the ground is covered by snow.

An annual extravaganza in Toronto is the Santa Claus Parade, which first took off in 1905 and now attracts more than a half-million people. Lavish floats, marchers, bands, clowns, and, of course, Santa and Mrs. Claus wind through the city along a 3.5-mile route.

In contrast to the snow and shivering cold of Canada is warm winter weather south of the Equator. Of course, that includes Australia, where, as in other countries that previously formed the British Empire, some practices — like Boxing Day on Dec. 26 — take place.

Less familiar are the facts that Santa at times has been depicted as wearing Australian-style clothing, including a wide-brimmed Akubra hat and flip-flops, and riding in a sort of pickup truck pulled by kangaroos. Some Aussies go to a beach to swim in the ocean, and it’s not unknown for Santa to come ashore riding a surfboard.

Argentina and South Africa share a Southern Hemisphere location with Australia, so sand and surf are more closely associated with Christmas than snow and sleet. Santas dressed in their traditional wool clothing do their best to keep shouting ho-ho-ho when they’d prefer to say hot-hot-hot.

Argentinians are lovers of meat, so it’s no surprise that an outdoor barbecue is a staple of activities. So are Christmas trees, usually artificial and sometimes decorated with cotton balls to represent snow. Fireworks at midnight often mark the start of Christmas Day, and the sky is filled with globos, paper decorations with a light inside that float into the sky.

Dining outside also is a highlight of Christmas in South Africa. The main course might be turkey, duck, or suckling pig, followed by a desert of malva pudding, a sweet cake prepared with apricot jam and vinegar, which gives it a caramelized texture.

Some activities, like trimming a Christmas tree and hanging stockings, may sound familiar. Depending upon where you live in the United States, outdoor activities like beach sunbathing, hiking in a park, or camping may be less likely. 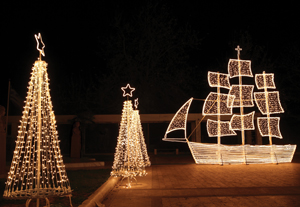 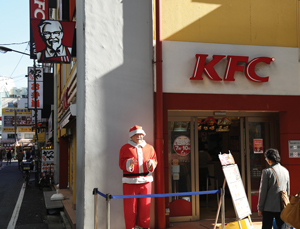 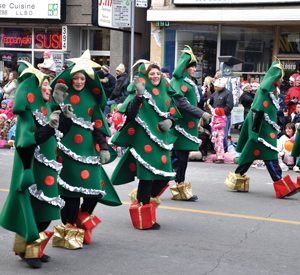 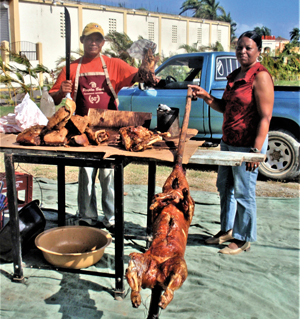