“Music is in more than the air; it’s in the town’s DNA,” says my friend when I tell her I’m headed for Macon, Georgia. I soon find that she’s right.

This small town, 85 miles southeast of Atlanta, is a place where music spans decades and genres, where folks like Little Richard, James Brown, Otis Redding, and the Allman brothers made music history and where musicians like Mike Mills and Robert McDuffie are ensuring that Macon’s music creds remain strong in the future.

But Macon (www.maconga.org) is more than just a breeding ground of music masters. In Macon, music history blends with personal history.

As my husband and I visit places connected to the above-mentioned artists, we meet their relatives, school chums, managers, and supporters, and these folks tell us stories — not well-rehearsed tales like those we hear on most trips, but informal ones like those that ricochet between friends.

We feel as if we’re guests at a big family party.

The feeling of intimacy begins when we take a Rock Candy Tour led by Jessica Walden, who regales us with stories about her uncle, Phil Walden, who was largely responsible for turning Macon from a sleepy Southern town into a major hub of R&B and Southern rock.

Over the years, his companies recorded the Allman Brothers Band and James Brown at the start of their careers and managed the careers of stars such as Otis Redding, Etta James, Percy Sledge, and Ike and Tina Turner.

Walden has personally met, or her father and uncle have told her stories about, not only Macon’s musical artists, but also about virtually every celebrity who has lived in or passed through the town in the last 50 years.

She tells us how Judy Garland taught a local chef to make egg salad, how Andy Warhol came to town as a reporter before he became a visual artist, and why Jimmy Carter credited Phil and the Allmans with helping him become president.

She pauses outside the Downtown Grill, one of Macon’s classiest restaurants.

“Here’s where Gregg Allman proposed to Cher,” she says.

She gives us the inside scoop on the couple’s stormy four-year marriage.

“I guess you could say they ‘drug it out,’” she says with a grin.

We hear more Allman stories at The Allman Brothers Band Museum at the Big House, the home and hangout of the original members of the band between 1970 and 1973.

Rob Schneck, a former road manager for Gov’t Mule (an offshoot of the Allman Brothers Band) as well as a friend of Gregg and Cher’s son, shows us around, interspersing facts with anecdotes drawn from his personal association with band members.

Of all the folks who knew the Allmans when they lived in Macon, it’s Louise Hudson, the one they called “Mama Louise,” who knew them best.

Today Hudson is officially retired from her down-home eatery, H&H Restaurant, but she still comes in almost every day to check on the chicken and chat with the customers. She likes to tell them about the day when “two skinny boys came begging for food. They said they had no money but were fixin’ to go on tour and would pay me when they got back.”

Hudson gave them heaping dishes of soul food; the boys started one of the hottest bands in the country, and Mama Louise became their lifelong friend.

The next day we stop by the Otis Redding Foundation, which showcases memorabilia from the family’s personal collection.

Redding’s daughter, Karla Redding-Andrews, greets us. A visitor asks which of her father’s songs is her personal favorite. She stops to think.

“Probably ‘I’ve Got Dreams to Remember,’” she says after a minute, “but I also like ‘Love Man’ because it describes my dad so well. Mom was the strict one. Dad would let us kids eat ice cream for dinner.”

During the rest of our visit, we’re privy to other stories — stories about sex, scandal, and segregation, tales about revitalizing neighborhoods and repurposing historic buildings in the city’s College Hill Corridor (www.collegehillmacon.com), which is a 2-square-mile area between Mercer University and Macon’s downtown business district.

Finally, before we leave, we pause outside an 1855 antebellum mansion, replete with marble steps and Corinthian pillars. We recognize it as the building that the Allman Brothers used as a backdrop for their first album.

Today, violin virtuoso Robert McDuffie — “Bobby” to his hometown friends — has turned the building into the Robert McDuffie Center for the Strings, a conservatory that is now being hailed as the Juilliard of the South.

“First came soul; then came Southern rock, and now it’s only fitting that Macon is a home for classical music,” says Jessica Walden.

With this, it seems certain that there will be more legendary artists — and more stories — as folks in Macon continue makin’ music. 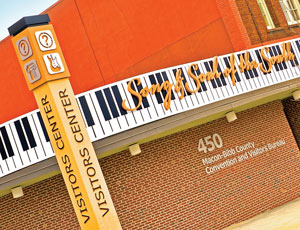 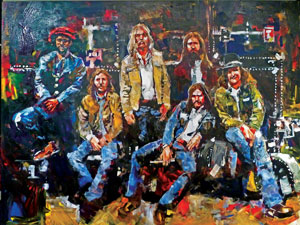 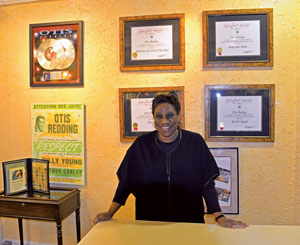 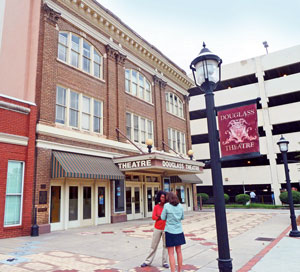 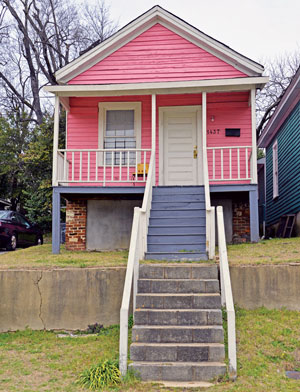 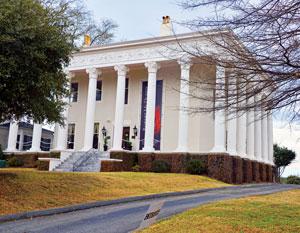