I think I’m at a bazaar in India, a market in Mexico, a village in Africa. People in bright traditional garb are weaving baskets, beading necklaces, stitching scarves.

A medley of sounds — lighthearted laughter, serious bargaining — and a multitude of languages fills the plaza. Exotic smells waft through the air.

In reality, my husband and I are in New Mexico, enjoying the first of three major art markets that over the summer transform Santa Fe first into a global village, next into a Spanish fair, and finally into a prestigious Native American art festival.

The season begins in July with the Folk Art Market (www.folkartmarket.org), which has ballooned into the largest international folk art market in the world. Partly as a result of this event, Santa Fe was the first city in the United States to be named a UNESCO City of Craft and Folk Art.

More than 170 craftspeople, all of whom have survived a rigorous selection process, come from 55 countries.

We walk the aisles, stopping to see silver jewelry from the Chinese province of Guizhou, ikat weavings from the Malaysian state of Sarawak, magnificent baskets from the Panamanian rainforest.

The preshow attracts avid collectors who often drop big money for museum-quality pieces, but there are less expensive items as well.

Best of all, fairgoers can visit with the artists, most of whom are accompanied by translators. One woman, a weaver from Sudan, tells us how the rebels killed her husband and burned her home.

“I carried my children for many days until I reached a camp where I was safe,” she tells us. “Now, thanks to this market, I support my family through my craft.”

While the Folk Art Market takes place several miles from the core of Santa Fe, the Spanish and Indian Markets (www.spanishcolonial.org), which are inextricably intertwined with the history and culture of New Mexico, are held in the downtown plaza, a collection of adobe buildings, some of which date back to the early 1600s.

In order to immerse ourselves in the atmosphere, we check into the Hotel Chimayó de Santa Fe. Like the Hotel St. Francis a few blocks away, the Chimayó is owned by Heritage Hotels, a company that takes special care to have its properties reflect New Mexico’s culture.

After admiring the Southwestern décor as reflected in everything from the chandeliers to the rugs, we wander through the largest exhibition of traditional Hispanic arts in the United States.

In short order we learn that santos, which depict saints, come in two versions (three-dimensional bultos and two-dimensional retablos), that tin and straw are frequently used materials in Spanish art, and that the handsomely carved wood furniture is much too large to fit in our house.

Back in the hotel, the chef at Tia’s Cocina serves up traditional meals based on his grandmother’s recipes. I choose “village tacos” for my main course, but I’m stumped when it comes to selecting the chile sauce. Do I want green, which is often — but, says the waiter, not always — hotter? Or should I get red, which is usually, but not always, more pungent?

He brings me a bowl of each.

“I brought you Christmas,” he says with a smile.

Within a few weeks, the plaza is transformed from a Spanish market to the world’s largest display of Native American arts (www.swaia.org).

We’re overwhelmed by the sight of 600 booths that exhibit the work of more than 1,000 artists from 100-plus tribes. We soon decide that the only way to survive is to relax, listen to live Native American music, watch some films on Native life, munch on fry bread, and then, calmed and fortified, look at the art.

Our plan works. We spend two days immersed in art that ranges from jewelry to sculpture, traditional to contemporary. The two unifying features are that all the artists are indigenous people from the United States or Canada, and they all produce top-quality work.

To our surprise, much of what we see is relatively affordable. Many of the top artists offer small items for a fraction of the cost of their award-winning pieces.

But for us, buying is not the goal. We want to look, listen, and learn. In short, we want to experience a Santa Fe summer. 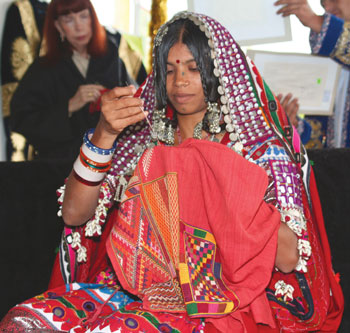 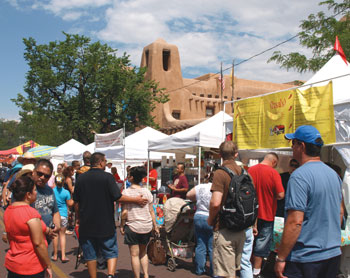 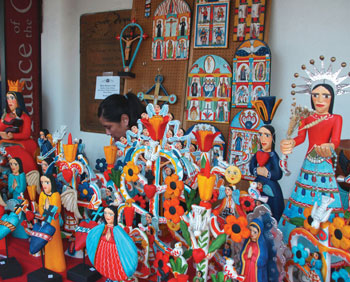 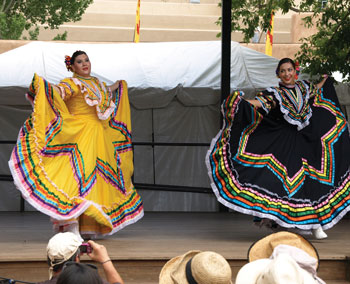 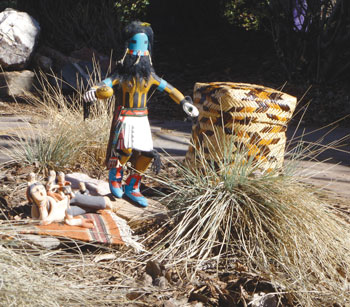 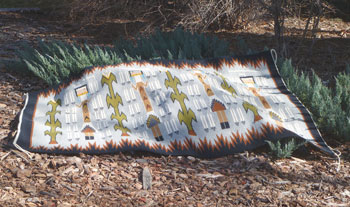