Two rows of young men are standing before me, poised at crisp attention and perspiring heavily.

The perspiration is understandable because despite the 90-degree heat, the men are formally outfitted in white helmets and heavy red coats with high black collars. About 100 people are staring at us.

I’ve been selected from among the onlookers to “inspect the guards,” a ceremonial throwback to the 1800s when the British were settling North America.

At that time, Fredericton, now the capital of the Canadian province of New Brunswick (www.tourismnewbrunswick.ca), was a refuge for U.S. Loyalists who remained true to the crown while many of their brethren championed an independent United States.

The head cadet and I walk down the aisles, checking the troops. Their boots — polished. Their pants — pressed. Their jackets — neatly belted.

He nods and leads his men through a high-stepping series of formations. Then they strut off the green to the delight of the many tourists.

Fredericton is awash with free and low-cost tourist-pleasing activities. In addition to the changing of the guards, the Historic Garrison District is filled with museums and old government buildings and surrounded by trendy restaurants and craft shops.

In fact, Fredericton and the two surrounding counties have more craftspeople per capita than any other place in Canada.

During the summer, free concerts are performed on the old military parade ground, and people can enjoy 50 miles of well-maintained walking trails that follow the banks of the St. John River.

But for us the biggest attraction is Kings Landing, a recreated Loyalist village. There are no power lines and no motor vehicles. Instead we find wagons with wooden wheels, women with hooped skirts, and men with hoes and fiddles.

As we wander through the 70-plus buildings that once belonged to settlers from the surrounding area, we speak with articulate and knowledgeable costumed interpreters: a woman who is quilting, a lad who is tending his horse, a man who is working at the sawmill. They tell us stories about the former owners of the various homes and workplaces.

Two hundred miles to the north, life was very different. The French were also lured by the agriculturally rich area, and by the mid-1600s they had established communities in the region they called Acadia.

Thousands lost their lives as they were herded onto small boats and forced out to sea. Others fled to the American colonies or other parts of Canada, hiding until it was safe to return to the rural areas of New Brunswick. There they eked out a living in British-controlled territory.

Today New Brunswick is the only Canadian province that is officially bilingual. People who live in the central and western parts of the province trace their heritage to England, while those in the north and east are fiercely French in their customs and language.

As we proceed up the coast toward the Village Historique Acadien, which is the French counterpart to Kings Landing, the Acadian flag seems to be everywhere. It’s painted on the fronts of buildings, flies on poles in the yards of private homes, and hangs from ropes strung in front of gas stations.

By the time we reach Caraquet, even the stop signs have changed to reflect the predominant population. Whereas in Fredericton the English word stop is above the French arrêt, in this part of New Brunswick, the arrêt precedes the stop.

To visit the Village Historique Acadien is to time travel through Acadian life from after the Deportation (Le Grand Dérangement) in the mid-1700s up to the mid-1900s.

As we did in Kings Landing, we make our way through the village — stopping at homes, sipping beer at the tavern, watching fish processing at the hatchery — while interpreters help us understand daily life in French Canada.

It’s easy to see that life in Acadia was difficult.

“Acadians started the day with the sun and ended with the sun,” says one woman, as she adjusts her apron and adds some vegetables to the stew that’s cooking over the fire. “They had to work hard, but c’est la vie.”

As is true on most of our trips, the more we learn, the more we want to know. But now we have to say farewell to New Brunswick — in two languages, of course. 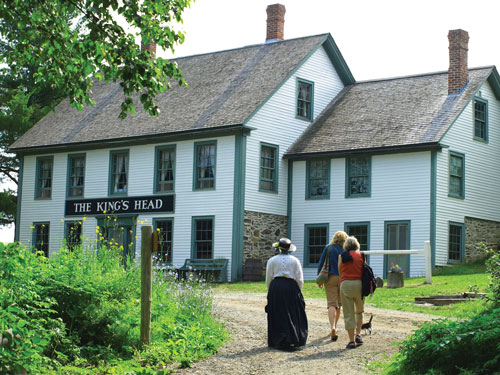 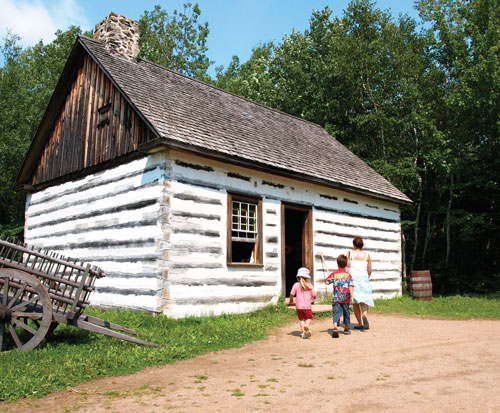 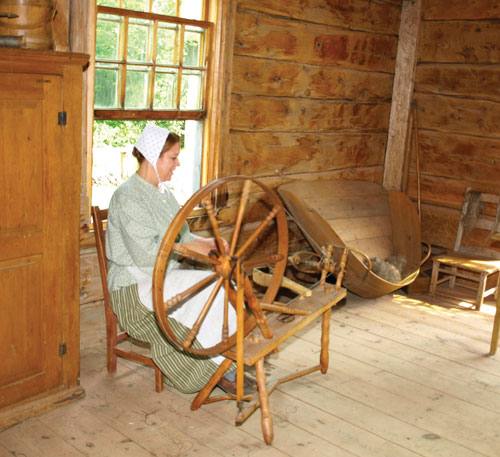 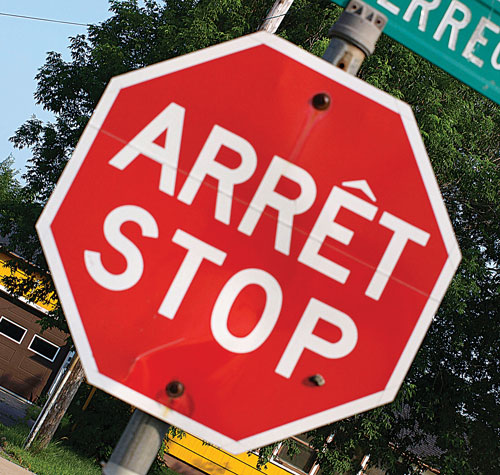