Traveltizers: Russia: Cruising the Waterways of the Tsars

“Russia is a riddle, wrapped in a mystery, inside an enigma,” said Winston Churchill in a 1939 radio broadcast.

Things haven’t changed much in the intervening years. The world’s largest country is still a land of gilded domes and golden spires as well as grand art, great music, and blue waterways.

But it’s also a land that has been ruled by those who win revolutions as well as by those who win elections; is sometimes officially communistic and other times casually capitalistic; and whose relationship with the United States has ranged from somewhat cooperative to outright confrontational.

An enigma indeed — which is, of course, exactly why my husband and I wanted to go there.

The first thing we learn is that Russia isn’t a particularly easy place for American tourists. Most find the language unintelligible, the alphabet indecipherable, and the regulations innumerable.

For example, individual travelers need an “invitation” from an authorized Russian travel agency verifying exactly where they’ll be staying each night during their visit. Spontaneity is not allowed.

Thus we opt for a riverboat cruise specifically designed for English-speaking passengers, which will let us travel in comfort and security.

Our first stop is St. Petersburg, the cultural gem of Russia. It’s here that I see my first onion-domed cathedral, proudly presiding over a watery maze that splinters the city into 100 islands connected by nearly 400 canals and bridges.

We spend three days amongst spectacular palaces, world-renowned museums, and magnificent gardens. We thrill to the performance of Swan Lake, which was first presented to the Imperial Ballet in St. Petersburg in 1895; tap our feet in rhythm to the rollicking music of the Cossacks; and are overwhelmed by the art of the Hermitage Museum, which has prehistoric artifacts as well as Greek sculptures and Impressionist paintings.

Experts say that if a person were to spend one minute per exhibit, it would take him 11 years to see it all.

Finally we visit a kommunalka, a communal home owned by several unrelated families. Each family has its own small room for living and dining, but they all share a common bathroom and small cooking area, which, in this case, consists of two stoves, a mini-refrigerator, and a few overloaded shelves.

I don’t want to leave St. Petersburg. It has an air of restrained elegance — historically important, regally proud, and visually stunning. But it’s time for the Viking Akun, our 200-passenger ship, to head south to Moscow.

For the next five days we cruise down the Svir and Volga rivers, stopping at a variety of small and midsize towns.

A guide introduces us to a woman who’s making matryoshka dolls, those small sets of figures that decrease in size so that they nest one inside another. Traditionally these dolls were painted in intricate designs; today many have more contemporary, and sometimes controversial, motifs.

One set, for example, depicts the largest doll as Putin and the smaller ones as former leaders of the Soviet Union, from Lenin to Yeltsin. Other sets are in the reverse, with Lenin outsizing Putin.

We opt for one that features the Disney characters Anna and Elsa. All things considered, it seems a safer choice than the one that portrays Putin and Trump.

We visit a school, eat lunch with a typical middle-class family, and tour churches filled with outstanding art. Before we leave I decide to be purified in a banya, which involves taking a steam bath and birch-broom massage before plunging into the cold river.

Back aboard the ship we sit in the Panorama Bar and enjoy the river views as we listen to presentations on all things Russian, from the Volga to the vodka. Finally, sated with knowledge and food, the Viking Akun docks at Moscow.

Like St. Petersburg, Moscow is gilded with domes, but while St. Petersburg is magical, Moscow is muscular. The cars are flashier, the streets more crowded, the malls larger. There’s even a toy store that covers more than a block.

We tour the Kremlin, where we hear stories of Romanov tsars and Communist leaders; enjoy the festive ambience of Red Square; and lunch at the enormous GUM department store, where any thoughts of Russia as a country devoid of luxury goods are quickly dispelled.

But of course Moscow isn’t Russia. Nearly 80 percent of Russia’s people live west of the Ural Mountains, where traditions may be stronger but life may be harder.

“But in Moscow there are more billionaires than babushkas,” says our guide.

On the last night of our cruise a group of us reflect on our trip while we enjoy a Russian-inspired meal.

“Churchill was right,” says one man. “Russia is most definitely an enigma.”

For an expanded form of this story, see traveltizers.com. 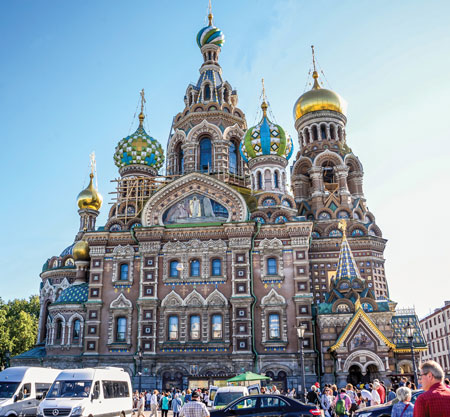 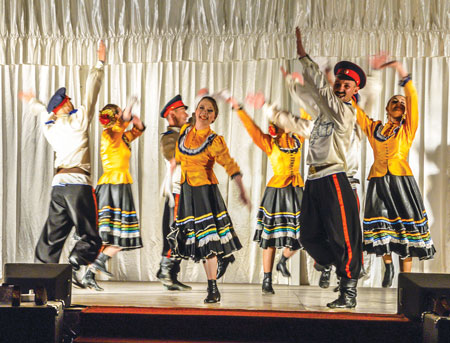 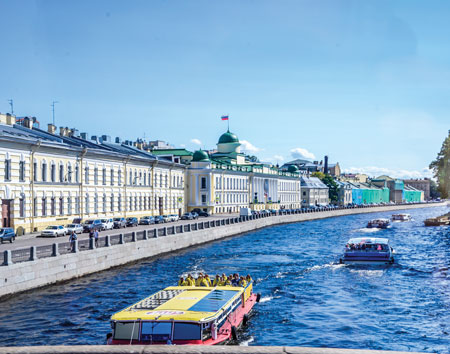