Due for release this fall, the Rob Zombie-produced, -written, and -directed film The Munsters seems like an appropriate pre-Halloween offering but will almost certainly be a “love it or loathe it” experience for fans of the beloved ’60s TV series on which the new production is based.

A stunningly beautiful actress during the 1940s and ’50s, Yvonne De Carlo first found fame on the classic-movie silver screen before branching out into what many major film stars of the era would have deemed unthinkable: joining the cast of a ’60s sitcom.

Born 100 years ago in September in Vancouver, British Columbia, the actress’s name still conjures up the image of an exotic Hollywood woman of mystery. No wonder De Carlo, who died in 2007, was the perfect choice for the sultry Anna Marie in 1945’s Salome, Where She Danced, her first lead role.

In 2011, I asked Bruce Morgan to share some insights about his famous mother.

“I was probably in my early 20s, and I saw the film projected in the screening room at someone’s home,” recalled Morgan. “Even though it was my mother, I was extremely impressed with her talent at such an early age — she was only around 22 when she made the film. She had total command of herself.”

A decade later, De Carlo was still dazzling audiences as glamorous Sephora, the desert-dwelling shepherdess and wife to Moses (Charlton Heston), in Cecil B. DeMille’s 1956 biblical epic The Ten Commandments.

Yvonne De Carlo’s rise to stardom began in various Canadian theaters and nightclubs before moving to Hollywood to work briefly as a dancer at the Florentine Gardens, followed by several years as a film extra at Paramount.

“Basically, the studio didn’t quite know what to do with her,” noted Morgan.

Her big break loomed when DeMille considered using her in what would have been her first lead role in The Story of Dr. Wassell (1944), but the deal fell through. 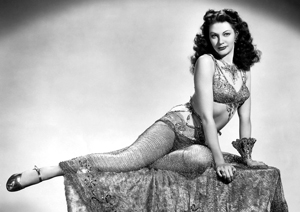 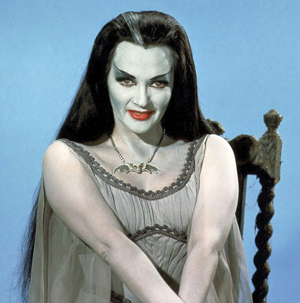 “DeMille had his eye on Yvonne and discovered her long before The Ten Commandments,” said Morgan.

While she could have faded into Norma Desmond-like movie-star oblivion, De Carlo reinvented herself in the 1960s by accepting the comedic role of TV’s Lily Munster.

“Long before The Munsters ever came along, my mother loved spooking people and enjoyed spooky movies,” Morgan explained. “She loved Dracula, so I had to laugh when she got the role of Lily Munster because something worked out that was meant to happen. She also understood what it meant to be in a hit television series, which could be meteoric in terms of your fame. She said, ‘It made me hot again!’”

But De Carlo wasn’t the first choice for the pallid, yet alluring, misfit monster TV mom.

“That was Joan Marshall,” said Morgan. “She was good, but she looked too much like Carolyn Jones of The Addams Family. So, my mother got the part and was told to play the role as if she was the mother in a normal sitcom.”

But aside from normal-looking daughter Marilyn Munster (played by Pat Priest, who took over the role halfway through the first season from Beverley Owen), the series was far from a typical sitcom production, with the remaining cast portraying a family of spooky but harmless monster-like characters.

Preparation for filming was demanding for those actors, and Morgan remembers accompanying his mother to the studio in the early-morning darkness.

“I would watch Abe Haberman make her up for the three to five hours needed with all the base makeup and highlights that were designed for black-and-white filming,” he recalled. “The makeup was green and blue and designed for the panchromatic film that was used. Black-and-white film sees color as shades of gray, so green was not the same as blue.

“There was a high level of technical quality on The Munsters, considering it was a TV show. The set was done right, and the number of mechanical effects per show was surprising. It was not an easy series to do.”

The Munsters was a hit for CBS, and even behind the tediously applied layers of makeup, De Carlo’s star status continued to shine through. And while she spent most of her career in motion pictures, like so many others who had success in a popular ’60s sitcom, she will forever be identified with one TV character.

Morgan believes his mother’s acting career was also inevitable, partly because of his grandmother, who he says was herself “a frustrated performer and dancer, transferring that ambition to her daughter.”

But he also remembers his mother describing a trip to California in 1932, when she was 10 years old, visiting the main library in downtown Los Angeles.

“She felt that she would one day be famous,” he recalled. “Whether real or imagined, she was endeared with a sense of destiny.”

This interview with Bruce Morgan was condensed and edited from the author’s book, Raised by the Stars. Nick Thomas teaches at Auburn University at Montgomery, Ala., and has written features, columns, and interviews for many magazines and newspapers. See getnickt.org.