On Nov. 26, 1922, British archeologist Howard Carter discovered the long-buried Egyptian tomb of King Tut. The tomb had been sealed for more than 3,000 years.

Carter’s discovery of King Tut’s tomb led to far greater discoveries within the tomb: the mummy of King Tut with a burial mask made of beaten gold, 21 ¼ inches from top to bottom, and weighing 22.5 pounds.

A popular belief of the era was that an ancient Egyptian curse would befall those who entered King Tut’s tomb. While several people who entered the tomb died unusual deaths shortly after they entered it, Carter, who discovered the tomb, did not believe in the curse.

“All sane people should dismiss such inventions with contempt,” he said.

King Tut’s curse gave way to chills galore in novels, magazines, lectures, and stage shows. Ten years after King Tut’s discovery, Hollywood got in on the act. Universal Studios hit box-office gold in 1931 with release of the first talking versions of Dracula with Bela Lugosi and Frankenstein with Boris Karloff.

Both actors were of European ancestry. Karloff’s father was British and his mother Indian. Karloff acted under heavy makeup in Frankenstein; his makeup would be even heavier for his role in 1932’s The Mummy.

The 10th anniversary of the discovery of King Tut’s tomb was very much on the minds of Universal Studios executives in 1932. With Karloff being of Anglo-Indian heritage, studio executives determined he would be perfect for the role of a 3,000-year-old mummy.

In the film, Karloff plays Im-ho-tep, a high priest of the Temple of the Sun. After his lover dies, Im-ho-tep is arrested for attempting to raise her from the dead, an unholy act. His punishment is to be buried alive.

The mummy of Im-ho-tep is discovered 3,000 years later by British archaeologists. As one of the archeologists reads aloud a transcription from an ancient scroll buried with Im-ho-tep, the mummy is awakened. It walks away.

Ardeth Bey, the mummy of Im-ho-tep, seeks the scroll from the archaeologists. While discussing it with them, Bey meets a young British woman he believes is the reincarnation of his ancient lover. He seeks to make her a mummy like himself.

The Mummy was released in December 1932. Despite recent remakes, the 1932 film remains popular with audiences and critics due to its “stunning visual effects” and a masterful performance by Boris Karloff, who critics said was perfect for the role.

Universal’s 1932 The Mummy may have helped popularize the idea of a curse of the pharaoh, or King Tut’s curse. Karloff’s ominous makeup no doubt also popularized and perpetuated the curse myth.

On the 100th anniversary of the discovery of King Tut’s tomb and the 90th anniversary of Boris Karloff’s The Mummy, read more about the historical event and view, if you dare, the film. To paraphrase Carter, “All sane moviegoers should entertain Karloff’s version of The Mummy with respect.”

James Patterson is a Washington-D.C.-based writer and speaker. 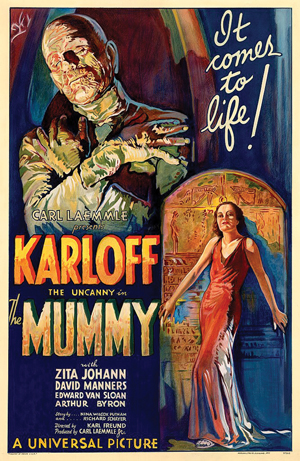 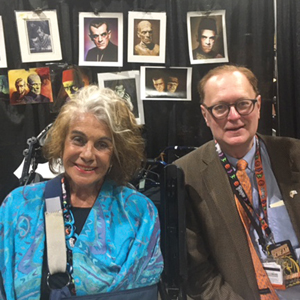