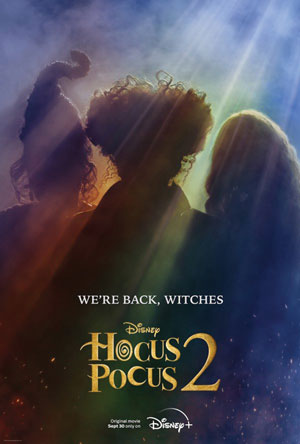 After taking eight long years to develop and film the story, Disney’s Hocus Pocus appeared in theaters as a 1993 fantasy/comedy/horror offering.

In the story, three villainous Massachusetts sister witches from Salem (of course) feed off the energy of young children in order to retain their youth. All three are eventually hanged for their deeds.

However, three centuries later, they inadvertently become resurrected one Halloween night by a naïve teenage boy who’s a newcomer to Salem.

And that’s when the fun starts.

With Hocus Pocus, all the boxes looked to be checked to provide Disney with yet another runaway theater hit. Surprisingly, it didn’t happen, and Disney’s release inexplicably fizzled at the box office.

But, over the years, and especially around Halloween with repeated showings on the Disney Channel and Freeform, Hocus Pocus gradually evolved into somewhat of a cult classic.

Now Disney+ is bringing out a highly anticipated sequel. Hocus Pocus 2 features the same wonderous (and seemingly ageless) cast as it did nearly three decades ago: Bette Midler as Winifred Sanderson, Sarah Jessica Parker as Sarah Sanderson, and Kathy Najimy as Mary Sanderson.

Appearing again also are Omri Katz as Max Dennison, back then the bumbling adolescent who give the evil ones renewed life, and Doug Jones, now a fan favorite since his portrayal of Billy the Zombie in the original release.

Tony Hale (Arrested Development) and Sam Richardson (Veep) come on board as well to round out the new cast.

Fletcher is particularly enthusiastic about the forthcoming movie: “I am beyond thrilled to be involved in the sequel to a film that is as beloved as Hocus Pocus. Fans around the world have embraced these characters and have made the film a Halloween tradition whose popularity continues to grow. How lucky am I to be back at Disney with these three extraordinarily talented ladies in the iconic roles they created, as well as our fabulous new additions to the cast!”

While this is a family-oriented Disney release is rated PG, be aware there is a smattering of crude language and magical violence scattered throughout the story. Hocus Pocus 2 premieres on Disney+ on Sept. 30.