The Reel Deal: Where the Crawdads Sing

In the film version of Where the Crawdads Sing, Daisy Edgar-Jones (Normal People, Fresh) stars as Kya, whom everyone in the North Carolina backwater burg of Barkley Cove calls “the swamp girl.”

Edgar-Jones, who’s 24 and hails from London, says, “I read Where the Crawdads Sing during the pandemic, and it made me feel really connected to Kya and her isolation … She has such an inner strength that I would love to have myself.”

Edgar-Jones tore through the entire book the day before creating her self-taped audition. Later, she worked with a vocal coach to master a North Carolina drawl.

“If I had a million people to choose from, I would never have found a better Kya than Daisy Edgar-Jones,” Owens enthuses.

The debut novel by the 73-year-old former nature writer (who holds a Ph.D. in animal behavior) has now sold over 12 million copies.

Crawdads is a lyrical stew, a coming-of-age romance, a grim crime thriller, a tale of survival, and a celebration of the natural world. Kya has lived alone in a desolate marshland after being deserted by her family.

Eventually, two town boys, Tate (Harris Dickinson) and Chase (Taylor John Smith), enter her world. She becomes involved first with Tate but is accused later of murder when Chase is found dead near the isolated swamp where Kya lives. The evidence gathered against her is daunting.

Scriptwriting chores went to Lucy Alibar (Beasts of the Southern Wild): “The cinematography jumped right off the page,” she says. “As soon as I started reading, I could see everything.”

But she still spent two years tweaking the script until she felt she had effectively captured the fervor of the book.

The forthcoming film is directed by Olivia Newman (First Match, Chicago Fire), who later admitted to not reading the bestselling work for fear she would be heartbroken if she wasn’t hired to steer the big-screen version of the story.

Co-producer Reese Witherspoon, who read the novel in two days, says, “I fell in love with Kya as a main character, as a little girl who’s growing up in this very rural area, who’s shunned by society, and is trying to find a way to just save herself, just survive …

“If you’d come to me when I was 23 [Witherspoon is twice that], I would’ve loved to play Kya … I’m always interested in a story where a woman saves herself, because women save themselves every single day.” 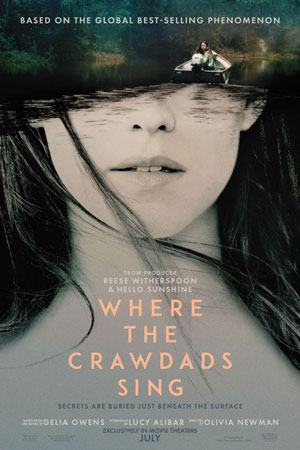