Good, old-fashioned “feel-good” movies seem to never go out of style, and audiences to this day still want to cheer for the little guy and watch sympathetic people overcome the odds. Tyson’s Run provides such a story.

Autistic Tyson Hollerman, age 15, has always been homeschooled by his mother, but he has now chosen to navigate the often-roiling waters of traditional high school.

Predictably, Tyson is made fun of by many of the campus big shots (mainly jocks) but is eventually supported by some empathetic fellow students.

Tyson’s father happens to be the school’s football coach and seems ill at ease — embarrassed, really — that his nerdy and unathletic offspring hangs around with him in the football players’ locker room.

When Tyson befriends a champion marathon runner named Aklilu, the boy, wanting to make his father proud of him, asks, “Can you teach me to run?”

“I can help you,” answers the superathlete, “but it’s up to you how you finish.”

Screwing up his courage, young Hollerman asks, “Is it OK with you, Father, if I learn how to run and become a champion like the boys on the football team?”

To which his dour dad responds enigmatically with, “It takes a special kind of runner to even compete in a very long race like this.”

As the story unfolds, Tyson learns to have faith in himself and bravely take that formidable first step to hoped-for success.

Director/scriptwriter Kim Bass also offers a refreshing perspective on those who have a condition that affects 1 out of 44 children in this country: “We are using autism as a vehicle to explain that everyone is gifted, everyone is unique, and everyone has to be given an opportunity to flourish and be the best person that he or she can be.”

He then adds, “The message of the film is: Don’t put limitations on people, and don’t allow limitations to be put on you. Tyson’s Run is a film I felt compelled to make.”

It was appropriate that Bass hired an autistic actor — The Walking Dead’s Major Dodson — to portray Hollerman.

Dodson says, “Tyson’s a great guy. He’s a person with goals and aspirations … He just operates in a different manner … He’s a normal kid for the most part.”

Filmed in Georgia, Tyson’s Run is coming out two years after its intended release date, due to pandemic-related issues that have been playing havoc with theatrical releases. Look for it March 4. 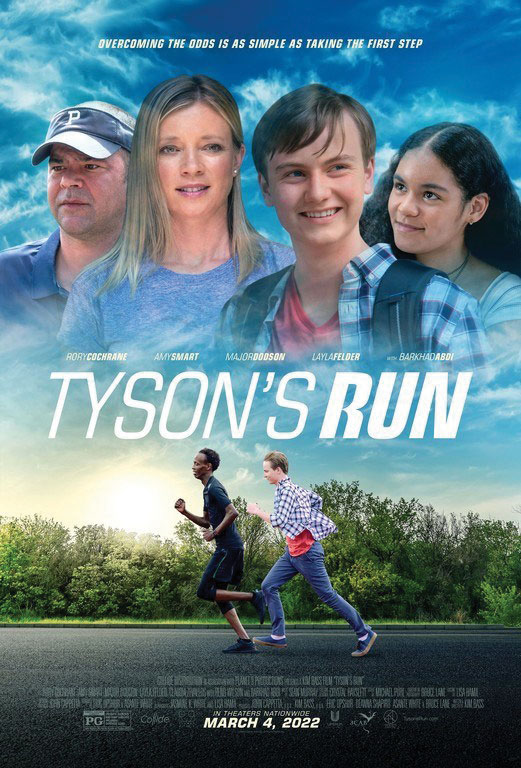