It Was 50 Years Ago Today: ‘The Lion Sleeps Tonight’

The first time the world heard of Brooklyn-born Robert John was in 1958, when he was 12 years old. Back then, the singing youngster was going by his real name: Bobby Pedrick Jr.

An appearance on TV’s American Bandstand — occasionally the ticket to stardom for a struggling unknown — showcased his “White Bucks and Saddle Shoes,” a catchy but forgettable Big Top Records ditty. It struggled nationally to a lowly No. 79 slot on the Billboard Hot 100 chart.

Five years later, as the lead singer of doo-wopping Bobby and the Consoles, Pedrick recorded another adolescent-oriented 45, a silly piece of fluff called “My Jelly Bean” on the Diamond label.

With surf and hot-rod records roaring up the 1963 singles charts, doo-wop was in its death throes. “My Jelly Bean” earned some East Coast airplay but not enough to make it a national hit. Pedrick and his pals never earned a second invitation into Diamond’s recording studio.

But Pedrick proved tenacious and felt in his heart that his distinctive and powerful voice would prove to be his ticket to the top of the Billboard charts someday. Maybe he would even reach No. 1?

During the ’60s, he drifted from label to label, leaving behind a few failed singles at each stop. Later in the decade, he changed his stage name to Robert John (John being his middle name). He then turned to songwriting for such established artists as Bobby Vinton and Lou Rawls.

John signed with Atlantic Records in 1971 and drew closer to making his lifelong dream a reality when he recorded “The Lion Sleeps Tonight,” which rose to No. 3 on the Hot 100.

The song is one of those tunes that seems to have been around forever, with various renditions being released as “The Lion Sleeps Tonight” and by its earlier title, “Wimoweh.” The tune has actually been a worldwide standard since 1939, when it had been created and first recorded as “Mbube” (Zulu for “lion”).

The song had been written in South Africa by a 30-year-old factory worker named Solomon Linda, who packed 78-rpm discs and swept the floors for the Gallo Record Company. On weekends, he performed with his vocal group the Evening Birds.

One particular crowd favorite was his “Mbube,” which incorporated a call-and-response pattern, well known to the Zulus and common in Black churches everywhere. Linda utilized an underlying chant and a meshing of male voices, with countertenor leader Linda yodeling and howling throughout.

Gallo had the Evening Birds record the tune. During the third taping, Linda improvised the melody that would become familiar to audiences internationally.

“Mbube” sold 100,000 copies and made Linda a star, although he would die in poverty later, with $22 to his name. His contribution to music has lived on, though, through such groups as Ladysmith Black Mambazo. 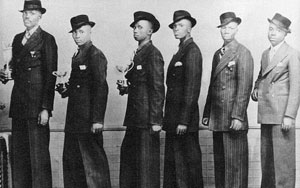