A new action thriller with the intriguing title of The 355 opens this month. The inspiration for the film’s title goes back to the Revolutionary War era, when 355 was the code number assigned to the first female spy — a woman unnamed (and obviously unappreciated) by historians to this day. 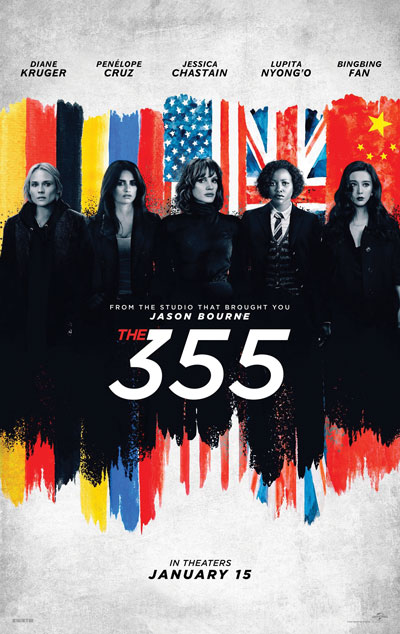 Today’s The 355 features a band of female spies, and each is a potential Dirty Harry in a dress. Together, these plucky ladies embark on a mission to locate and dispatch evil mercenaries who have secured a lethal, top-secret weapon.

In today’s high-tech world, the enemy is invisible and has the ability to destabilize entire countries from a distant keyboard. Because of this, a team of elite spies — each coincidentally a gorgeous fashionista — has been assembled.

They all work for different intelligence agencies — American, British, German, Colombian — and each faces a common foe; if that foe is not stopped, the result could be World War III.

The script for The 355 offers plenty of rock ’em, sock ’em action. Also, the four women, though seemingly working in an atmosphere of solidarity, are all in reality playing both sides against the middle. Which means that none of them can be completely trusted.

The foursome develop a tenuous loyalty that could save the world — or result in their deaths. To add to their stress levels, all must also work at staying one step ahead of a mysterious Chinese woman named Lin Mi Sheng (Fan Bingbing), a high-tech baddie who is monitoring their every move.

The story — reminiscent of some of the best James Bond works — ricochets around the globe and includes stops in such trendy locales as Paris, Morocco, and Shanghai. Dodging machine-gun bullets, scaling buildings, and leaping from rooftop to rooftop provide the action that is the mainstay of many of today’s thriller offerings.

For the female actors, rehearsals included hours of combat training and learning to fight in feminine attire, including high heels — something that male action performers never have to be concerned about.

“My goals and dreams for The 355 are that we just accept the fact that women are awesome and tough,” Chastain remarks. “I’m excited for society to start acknowledging what’s happening in our world.”

The 355 is written, produced, and directed by Simon Kinberg, who is best known for the X-Men movies. Rated PG-13, the action explodes nationwide soon. Enjoy!