Willing to Wander: Drive-in Theaters That Are More than That

From time to time, residents of the little town of Farmington, Maine, gather to attend events ranging from a craft fair and flea market to a band concert and Catholic Mass.

At a site in Fort Lauderdale, Florida, the attractions include an arcade, car museum, and swap shop.

Rather than being seated in an elegant concert hall in New York’s Lincoln Center, guests attending last year’s prestigious New York Film Festival watched the entrants while seated in their family car.

These seemingly disparate places and performances have one thing in common: their location at drive-in movie theaters.

Once scattered about the country, these throwbacks to the past today are few and far between. Yet they still exist and have much to offer those who seek them out near where they live or when traveling farther from home.

As the number of venues where people watch motion pictures from the comfort of their car has dwindled, the variety of activities they offer has mushroomed.

In an effort to keep old-time customers and attract new ticket buyers, drive-in theaters have become much more than that. Some offer a choice of things to see, do, and enjoy that extends well beyond their original appeal.

That wasn’t always the case. When the first drive-in opened in Pennsauken, New Jersey, in 1933, patrons watched silent films. By the end of World War II, about 150 “outdoor movies” were operating throughout the country.

This was followed by rapidly rising car ownership and the growth of the suburbs, which combined to support an explosion of drive-ins to a total of about 4,150 in 1951.

That number is estimated to have plummeted to no more than 300 today, and their operators are fighting to remain viable against the proliferation of entertainment options. Some are stressing the nostalgic charm of what they offer, while others augment showing films with an array of other options.

The activities can offer more, sometimes much more, than watching a film. One example is the Narrow Gauge Cinema in Maine. Along with opportunities to shop, listen to music, and even pray, it allows people attending concerts to pitch a tent and spend a night under the stars.

The Fort Lauderdale Swap Shop & Drive-in Theater is said to include on its 89-acre site the largest daily flea market in the world. It’s also home to a museum-quality collection of rare Ferraris and other cars, along with automobile memorabilia and trophies. The complex claims to be the second-biggest tourist attraction in a state that’s packed with them.

The Lincoln Center wasn’t the only film-festival site to move its festivities outdoors during 2020. In Maine, the Skowhegan Drive-in hosted that state’s International Film Festival, which showcases motion pictures from around the world with a focus upon Maine- and New England-themed productions.

Other drive-in theaters also offer some surprises. Fundraising events, Halloween trick-or-treat activities, and a wedding have taken place at the Cumberland Drive-in located in Newville, Pennsylvania.

In New Hampshire, the Northfield Drive-in has hosted business conferences, comedy shows, and concerts. Some bands even launch drive-in movie tours, traveling around the country to perform outdoors when films aren’t being shown.

During this time of closed auditoriums and stadiums, outdoor theaters in Bridgton and Madawaska, Maine, have served as alternative venues for high school graduation ceremonies. 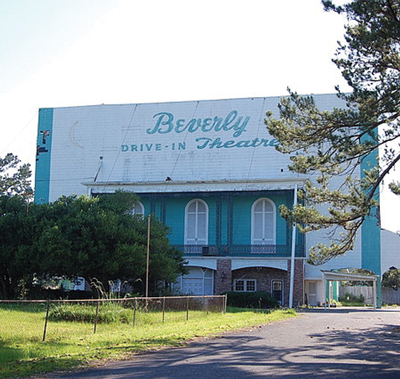 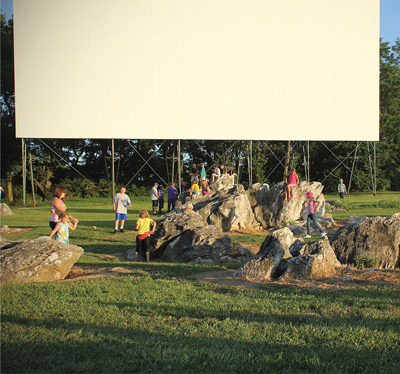 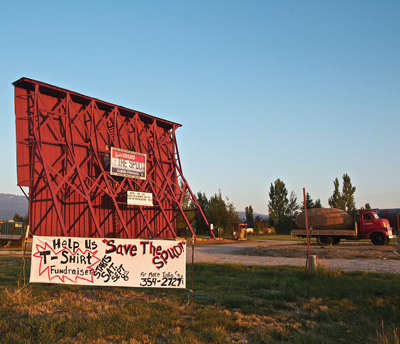 Those who like to reminisce about the heyday of drive-in theaters have much food for thought as their minds tiptoe through the past.

For example, they may recall that when the Beverly Theater in Forrest County, Mississippi, was constructed in 1948, the original owners built their family home beneath the main screen. That cinema has been listed on the National Register of Historic Places.

So has the 66 Drive-In near Carthage, Missouri, which is one of the few historically intact drive-in theaters still operating along historic Route 66. It looks and feels much as it did when it opened for business in 1949.

While many early outdoor theaters that occupied fields and pastures outside of towns have been engulfed by suburban sprawl, the 66 Drive-In remains in its original rural setting.

Most of the features have been retained. The 66-foot-high, steel-framed screen structure continues its dual role: One side supports the movie screen, while the other is a huge billboard displaying the 1949 message, “66 DRIVE-IN THEATRE, CARTHAGE, MO.”

Also remaining from when the theater opened are a playground, concession stand/projection booth, and the ticket cubicle, whose Art Deco and Streamline Moderne styling provided an up-to-date, cutting-edge feel at the time.

Other outdoor theaters offer different but no less intriguing throwbacks to earlier times. The National Register of Historic Places pays homage to the Spud Drive-in, which is located in a potato-farming region of Idaho.

The entrance sign features a giant potato on a 1946 Chevrolet flatbed truck. The Spud offers overnight accommodations, and guests may watch movies from their front porch or an outdoor hot tub, and then enjoy the blanket of stars that fills the night sky.