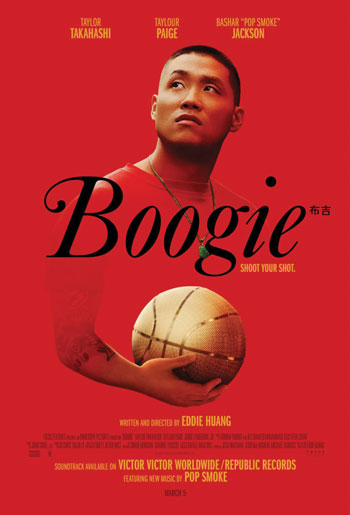 It seems that there aren’t too many lines of work that 39-year-old Eddie Huang hasn’t been involved in.

And now the busybusybusy son of Taiwan-immigrant parents is bringing his coming-of-age drama Boogie to the silver screen.

Now-deceased rapper Pop Smoke — he was murdered in 2019 — provides the haunting music that is woven throughout the story.

Boogie is a classic inspirational sports drama but one that is played out, for a change, in the Asian American experience.

Written and directed by Huang, the movie tells the story of Alfred “Boogie” Chin, a Chinese-Taiwanese American high school basketball phenomenon in New York whose dream is to play in the NBA. He maintains these dreams amid turmoil at home and among his classmates at his Queens high school.

Boogie’s parents lean on him to try for a scholarship to a prestigious university. Chin must deal not only with them and at-school rivals, but also navigate a relationship with a winsome girl he has recently met and fallen in love with.

Discouragement and resolve hang in equal measure over Boogie’s head like a threatening raincloud.

“We never expected to have freedom or independence or equality in this country,” he proclaims, “but it doesn’t matter what the challenges are, you run through that wall.”

He also expounds cynically on some daunting stereotypes: “No one believes in an Asian basketball player … it’s a joke in this country. We can cook, clean, count real good, but anything else, we’re picked last.”

there’s the crushing burden of expectation. When Chin draws close to his lofty goal, he admits to his girlfriend, “I’ve got to represent. I’ve got 5,000 years of Chinese history. That’s a lot of pressure.”

She, in turn, offers simply, “You have a chance to change history.”

Huang has admitted he was inspired by the hit feature Good Will Hunting, whose story motivated Eddie to enter the filmmaking world.

“That movie was the moment where I said I would like to make a movie that changes another kid’s life. The way that they were able to humanize domestic violence and those relationships, it opened my eyes because I didn’t know you could talk about stuff like that in movies.”

Released by Focus Features, Boogie is scheduled for a March 5 release.