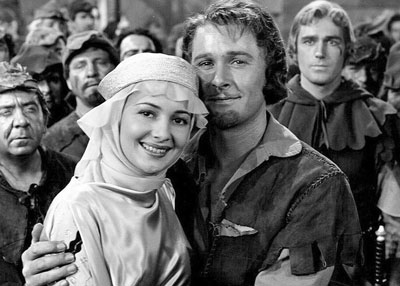 It’s a sobering thought for fans of classic film. The passing of Olivia de Havilland in late July, just three weeks after her 104th birthday July 1, represents the loss of the last surviving big-screen legend from Hollywood’s Golden Age of the 1930s.

While other actors are still with us who were indeed active in film during the ’30s, de Havilland was truly the last A-list star from that era whose name could be bundled with the likes of Bogart, Gable, Hepburn, and so many others. They are simply now all gone.

While I never had the chance to interview de Havilland directly, she did answer some questions by mail in 2009 for a story I was preparing for the Washington Post on the centenary of Errol Flynn’s birth.

The letter arrived by FedEx from France, where she lived for most of her post-Hollywood life, and was hand-signed in her glorious flowing script. In it, she shared some memories of the Aussie co-star with whom she was frequently cast.

De Havilland and Flynn (1909-59) were one of the most popular on-screen couples during the early classic film era. The pair worked together in eight movies from 1935 to 1941 and appeared in separate scenes in a ninth film, Thank Your Lucky Stars, in 1943.

Flynn, of course, continued to be sensationalized by the press and authors long after his death. Was he mischaracterized, I asked her?

“His roguish reputation was very well deserved, as he more than candidly revealed in his remarkable autobiography, My Wicked, Wicked Ways,” she wrote.

“However, through this very same book, we also know that he was a reflective person — sensitive, idealistic, vulnerable, and questing. But I think he has been incompletely represented by the press: It vulgarized his adventures with the opposite sex and seldom, if ever, touched upon or emphasized the other facets of his life.”

Despite his popularity, Flynn was never recognized for his acting with even an Oscar nomination (de Havilland was nominated five times and won twice). Was that an oversight, I asked her?

“Unfortunately, at the time when Errol enjoyed his greatest success, the adventure film, as a genre, was not sufficiently appreciated and therefore his appearances therein were not as highly regarded as they might,” she explained.

“However, I do feel he played his roles with unmatchable verve, conviction, and style. In doing so, he inherited the mantle of Douglas Fairbanks Sr., who was my favorite film star. No one since Errol has worn that mantle; it is buried with him.”

I was also curious if she ran into Flynn after their time together on screen. She said that happened only on three occasions, the last one at the Beverly Hilton’s Costumers Ball two years before his death.

“Quite unexpectedly, while I was talking to friends during the cocktail hour, Errol left his own group and asked if he could take me to dinner,” she recalled. “He seated me on his immediate right and, soon joined by others, took on the role of gracious host with everyone on his left — all the ladies — while I did my best to entertain the gentleman on my right.”

De Havilland’s letter concluded with a delightful postscript indicating a longtime private ritual that she adhered to every year.

“On June 20 (Flynn’s birthday), I raised a glass of champagne to Errol, as I always do.”

Come next July, many classic film fans will likely repeat that ritual to honor Olivia, too.

Nick Thomas teaches at Auburn University at Montgomery, Ala., and has written features, columns, and interviews for over 800 magazines and newspapers.