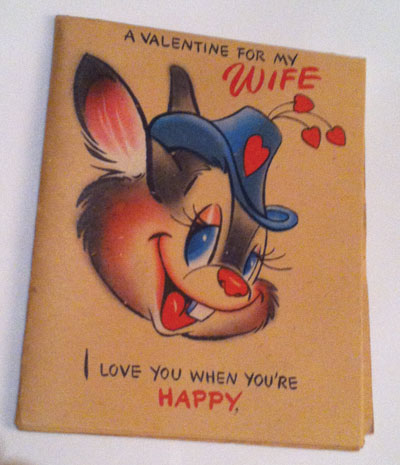 Art & Antiques by Dr. Lori: Vintage Valentines from the 1940s

The winter holiday of Valentine’s Day, which falls on Feb. 14, honors a goddess and a saint: The goddess is Juno, the Roman goddess of marriage, and the Christian martyr and saint is St. Valentine.

The most common collectibles of the holiday are a telltale sign of its arrival: the printed Valentine cards exchanged by children and adults alike.

While the advent of commercialized printing changed the face of the greeting-card industry in the early 20th century, valentine cards of the 1940s speak volumes about a tumultuous time in American history. They also highlight our midcentury modern culture.

Valentine cards from the 1940s often featured poems, rhymes, special events, famous places, cartoon characters, the military, and lovers throughout history, like Samson and Delilah or Antony and Cleopatra, among others.

Some of the rare, collectible, and valuable valentine cards derived from the spectacle that was the World’s Fair held in New York City in 1939-40. One example featured an illustration of the World’s Fair’s Trylon and Perisphere structures by architects Harrison and Fouilhoux. It read, “Hey, hey! You’re the FAIR-est Valentine in the world.”

Valentines that fall into more than one collecting category — like World’s Fair collectibles, vintage printed greeting cards, etc. — and valentines with a variety of imagery attract interested buyers and command higher prices on the market.

A World’s Fair Valentine card, for example, can be valued at $15, whereas a similar valentine with no connection to the World’s Fair may only be worth $2 to collectors.

World War II-era valentines often offered cheerful sentiments despite the fact that the war was ever present in the minds of many lovers. Some wartime valentines featured figures of children dressed in military uniforms stating that “I’d FIGHT them all for you, Valentine.”

Air and sea travel figured prominently in the decades of the 1940s-50s. Zeppelins, airplanes, rockets, and ocean liners were pictured on valentines that read: “I’m MOONING over you, Valentine,” “Is there SPACE in your heart for me?” and “I’d SAIL the ocean blue for you, Valentine.”

Even big businesses got into the act on Valentine’s Day. Some valentine cards featured pictures of kitchen appliances, like refrigerators, stoves, etc.

A cute early-1940s valentine card featured a girl outside and a boy inside a new, single-door, light-blue refrigerator, or “the Frigidaire,” as it was called. The card read in the boy’s voice: “Your FRIGID AIR is not so nice. Don’t treat me like a cake of ice! Be my Valentine.”

Famous cartoon characters were pictured on many valentines, and some of the most popular characters who appeared on workplace posters and war-bond announcement flyers were the beloved Disney couple Mickey and Minnie Mouse, along with other Disney friends.

Similarly, cartoon characters like Daisy Mae and others from the Li’l Abner comic strip drawn by Al Capp were popular features on valentines of the 1940s. Hallmark, in cooperation with United Feature Syndicate, produced a line of cards featuring the Li’l Abner gang and other comic strips in 1946.

Personally, I think one of the best valentine card ideas came from the designers at The E. Rosen Company of Providence, Rhode Island. The Rosen firm produced a valentine card in the 1940s called the lollipop card. This trendy card featured two puppies on the cover and read: “Puppy love is dandy, so I’m sending you this CANDY.”

That’s right; this particular valentine’s card came with its own candy. Now that’s a card everybody can love.