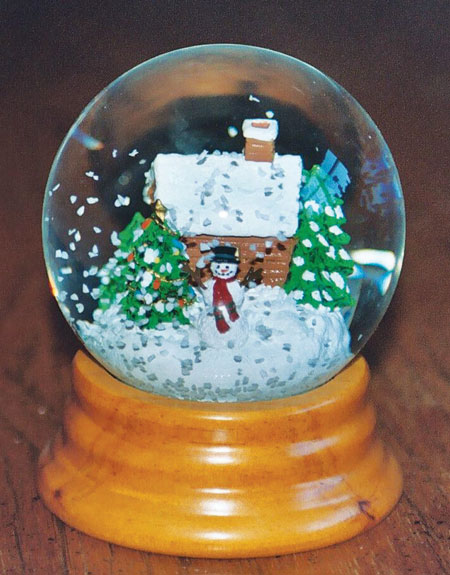 It’s funny, but everyone seems to have a different calendar when it comes to decorating for the season. Some stores start decorating for the holidays in mid-October, while others wait until the chilly winds of early December arrive.

Whether winter decorations brighten your home as early as Halloween or linger through Super Bowl Sunday, decking the halls is a tried-and-true seasonal favorite.

With guests coming and going as we usher out the old and ring in the new year, the age-old question of when to deck and when to deinstall the holiday wreaths, ornaments, figurines, etc., is one of personal preference.

Winter collectibles are popular and speak to our image of the holidays.

Byers Choice Ltd. carolers, a Bucks County, Pennsylvania, mainstay and international favorite, are popular collectibles featuring moveable figurines on solid bases. The heads of the singing carolers are hand-painted and made of clay.

Each caroler is handmade by a skilled artisan at the Byers Choice Ltd. workshop in Chalfont, Pennsylvania, and visitors can watch figures being produced on the shop floor during a self-guided tour of Byers Choice Ltd.

Carolers are produced and marketed by theme — carolers by the sea, Charles Dickens characters, American patriots, etc. — relating to the Christmas holiday and are widely collected throughout the year.

It is widely believed that collectible snowmen were first catapulted into the public eye in the early 1950s, well into the postwar period in America. Today, many folks have taken snowman collecting to a new level.

Arguably, the most famous snowman of all time is Frosty the Snowman. This snowman was actually first introduced as a song before becoming the pop culture icon that we all know and love.

The wintery-themed novelty song was produced by Steve Rollins and Jack Nelson and recorded by cowboy crooner Gene Autry in 1950. Trying to capture the success of “Rudolph the Red-Nosed Reindeer,” a recording that sold 2 million copies, Autry recorded the quintessential snowman’s theme song.

By 1969, the animation company of Rankin/Bass produced a half-hour TV special featuring Frosty the Snowman and the unmistakable voices of Jimmy Durante and Jackie Vernon. The rest of this snowman celebrity story is corncob-pipe history.

Snow artistry has taken on many forms when it comes to winter collectibles, including the ever-popular snow globe.

Snow globes, snow domes, or, as the Germans call them, schneekugeln, were first introduced in France during the early 1800s as a successor to the hand-blown glass paperweight.

At the 1889 International Exposition in Paris, the snow globe got worldwide attention as a souvenir. This World’s Fair snow globe featured a model of the newly built Eiffel Tower, designed by Gustave Eiffel, inside.

Initially, snow globes consisted of a heavy, lead-glass dome placed over a ceramic tableau. The globes were filled with water and then sealed. The snow inside the globe was created with bone chips, porcelain pieces, or non-soluble soap flakes.

More recently, the snow inside a typical snow globe is produced from tiny pieces of white plastic and enhanced with distilled water and glycerin to make the water denser and the snow appear to realistically move within the globe atmosphere.

In the Victorian era, the British called the collectible tableaus “snowstorms” as they gained popularity from circa 1890 to 1901.

Despite their European beginnings, snow globes were mass produced in the U.S. thanks to Pittsburgh, Pennsylvania, native Joseph Garaja. The first mass-production patent for snow globes featured Garaja’s new base, which allowed the globe to be screwed into it like a light bulb.

In the 1940s, snow globes were produced as advertising paperweights, travel souvenirs, and vacation keepsakes.

Today, snow globes are traded and collected worldwide; specialty annual snow globes, featuring products and characters from companies like Louis Vuitton, Chanel, and Disney, are big gifts with collectors. Some range in value from $500 to $5,000 at auction.

Whether your winter is filled with days building your own Frosty on the front lawn or sipping hot cocoa by the fire, snowy-season collectibles are fine additions to your home and will surely satisfy your need to decorate with a seasonal flair.

Dr. Lori Verderame is the award-winning Ph.D. antiques appraiser on History channel’s The Curse of Oak Island and weekdays on Doctor and the Diva. Dr. Lori presents her Antiques Appraisal Comedy Show to audiences nationwide. Visit www.drloriv.com/events or call (888) 431-1010.