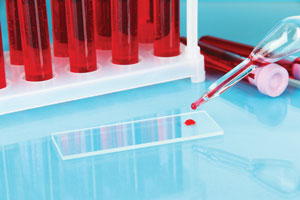 A simple blood test for Alzheimer’s would be a great advance for individuals with — and at risk for — the disease, as well as families, doctors, and researchers.

At the Alzheimer’s Association International Conference® 2020, scientists reported results of multiple studies on advances in blood “tests” for abnormal versions of the tau protein, one of which may be able to detect changes in the brain 20 years before dementia symptoms occur.

In particular, the reports focus on a specific form of tau known as p-tau217, which seems to be the most specific to Alzheimer’s and the earliest to show measurable changes.

Changes in brain proteins amyloid and tau, and their formation into clumps known as plaques and tangles, respectively, are defining physical features of Alzheimer’s disease in the brain.

Currently, the brain changes that occur before Alzheimer’s dementia symptoms appear can only be reliably assessed by positron-emission tomography (PET) scans and from measuring amyloid and tau proteins in spinal fluid (CSF).

These methods are expensive and invasive. And, too often, they are unavailable because they are not covered by insurance or difficult to access, or both.

“There is an urgent need for simple, inexpensive, noninvasive, and easily available diagnostic tools for Alzheimer’s. New testing technologies could also support drug development in many ways — for example, by helping identify the right people for clinical trials, and by tracking the impact of therapies being tested,” said Maria C. Carrillo, Ph.D., Alzheimer’s Association chief science officer.

“The possibility of early detection and being able to intervene with a treatment before significant damage to the brain from Alzheimer’s disease would be game changing for individuals, families, and our healthcare system.”

A blood test, for example, will enable interpretation and understanding of Alzheimer’s progression in much larger, more diverse, and more robust populations.

“While these new reports are encouraging, these are early results, and we do not yet know how long it will be until these tests are available for clinical use. They need to be tested in long-term, large-scale studies, such as Alzheimer’s clinical trials,” Carrillo added.

“In addition, we need to continue research to refine and verify the tests that are the current state-of-the-art — including cerebrospinal fluid and PET imaging biomarkers.”