Chalk it up to the intergenerational allure of cuddly babies and snuggly toddlers.

The new infant-care program at Schreiber Pediatric Rehab Center has expanded volunteer opportunities for area seniors — in addition to providing much-needed services for parents with newborns.

“It has been pretty successful,” Fink said. “Who wouldn’t want to hold a baby, feed a baby?”

Seniors Nancy Vogel, Valerie Korman, Mary Alice Gerfin, Peggy Toms, and Leon Hutton all agree that volunteering at Schreiber’s preschool and new infant room is an enjoyable experience that keeps them coming back week after week.

Schreiber “loves having seniors in the building, and they love being here. It’s been a very successful partnership,” said Fink.

Schreiber Pediatric, originally known as the Society for Crippled Children and Adults, began in 1936 as a vision of Edna Schreiber in response to the polio epidemic. Schreiber was a polio nurse (a profession today that would be similar to a physical therapist) and ran the clinic until the late 1960s, when she retired.

The outpatient clinic, which by the 1980s was associated with the National Easter Seals Society, began focusing on specialized pediatric therapy services for children from birth to age 21 with developmental delays and disabilities. The organization also began a preschool to include both children with and without disabilities.

In 1994, it disassociated with Easter Seals and moved from its Janet Avenue, Lancaster, home to its current location on Community Way, Lancaster. At that time, it was renamed Schreiber Pediatric Rehab Center for its founder and first executive director.

Today, 3,000-4,000 children receive services from Schreiber Pediatric — some in their own homes, some at the center, and some in their school.

Besides therapy services and its preschool/daycare programs, Schreiber also runs summer camps, a bowling program, a social skills program, kids yoga, and Club 65, a program for youth and young adults with disabilities to experience such activities as going to the movies, out to eat, or to a trampoline park.

Last August, Schreiber opened an infant room after receiving a $250,000 grant from the Donald B. and Dorothy L. Stabler Foundation and fundraising matching donations from the community.

Prior to opening the state-of-the-art infant room, Schreiber was unable to accept children younger than 12 months old into its daycare program, Fink said.

Being a nana is senior Nancy Vogel’s thing, and the Rock-A-Baby program is “good for nanas and good for the kids. I dearly love rocking them. They need a nana to rock them,” Vogel, 74, said. “They just want to be held.”

Vogel has volunteered at Schreiber for six months, when she moved to a senior living community. Vogel said she enjoys volunteering in the Rock-A-Baby program so much that she often goes early and stays after her 9-11 a.m. shift.

“There are several ladies who work there, and I help them feed and get the babies to sleep by rocking them.”

She doesn’t change diapers, but “I usually end up on the floor playing with the kids.”

There are generally nine babies, some of whom are toddlers who are busy playing with toys and can feed themselves, and some of whom are “lie down” babies who need bottles fed to them, she said.

Vogel said she doesn’t like to see babies left to cry to go to sleep, so she rocks them. The toddlers are usually ready to nap and will lie down because they want to sleep.

“It’s amazing there are no screamers,” she said. “I couldn’t get that done at home. These girls (Schreiber employees) are so good.”

Senior Valerie Korman was a teacher for many years at Central Manor Elementary School in Penn Manor School District.

“You become younger as well when you begin to deal with kids,” Korman said. “After retirement, when you can’t interact with kids, it’s like losing your left arm.”

Therefore, rocking babies after she retired in 2012 was her goal. But because of HIPAA regulations, Korman said hospitals wouldn’t accept people coming in to rock their babies.

So she started volunteering at Schreiber Pediatric Rehab Center instead. When Schreiber opened its infant room, Korman, 62, jumped at the chance to rock the babies there.

While Schreiber doesn’t mind if its volunteers miss shifts, the Millersville resident said she has missed only a handful of times when traveling.

“I want to go (to rock the babies); it’s very settling. You don’t mess with the time I go to Schreiber.”

Korman tries to find the babies who are extra fussy to help the women who work in the infant room. She feeds the babies with bottles as well as with spoons, puts the babies to sleep by rocking them, and plays.

“I sing songs, read poems, and do art projects,” she said.

Korman also volunteers in the preschool room. The children have free play and are then off to the room’s various centers to learn about the alphabet, numbers, counting, colors, and shapes. She also helps with hand washing, giving the kids snacks, filling backpacks, and zipping coats.

“I look forward to going. It’s so varied between the two programs,” Korman said.

Once a month, Korman also serves as a swim buddy with the 3- to 5-year-olds.

“I help change 10 kids into their swimsuits, take off their shoes and socks, and stay with the children. I do whatever I can to help,” she said.

When they get into the warm, 85-degree pool, they have group time and then practice jumping up and down, putting their faces in the water, doing back and front floats, kicking their legs, and jumping into the pool and getting out of it — survival techniques. Then they enjoy 45 minutes of playtime.

Schreiber is a special place for 75-year-old Mary Alice Gerfin: Her 15-year-old grandson has been going to Schreiber for years, and her husband, Michael, had been treated by founder Edna Schreiber when he was a young man.

For the past few years, Gerfin and her husband have volunteered for Schreiber’s annual Rubber Duckie Race. While she sells tickets, her husband, who is a member of Schreiber’s board of directors, prepares Lancaster County Park for the fundraising event.

In addition to the race, the retirement community resident now also volunteers in Schreiber’s new infant room. For two hours every Wednesday, she cuddles the babies, helping them to settle down, and feeding them.

“When I saw they were opening an infant center, it was just a normal thing to do for me,” said Gerfin, who has been volunteering in the infant room since the first week it opened.

“It’s natural for me. I love babies and love to cuddle them. It uplifts me to see their dear little faces smile at you. I can’t imagine not wanting to do this.”

Every Wednesday from 11 a.m. to 1 p.m., “cuddler” Peggy Toms also can be found in Schreiber’s infant room.

“I sit in a rocker and they bring the babies to me,” the 89-year-old Lancaster Township resident said. “I sit there and hold them close until they settle down. I also feed them with a bottle to settle them down.”

Prior to her retirement, Toms worked with children at the Intermediate Unit for 20 years and always enjoyed children of any age, she said.

Now Toms has found that rocking babies is something she loves doing.

“I really do,” she said. “It’s something I’m able to do without a problem, and, fortunately, they say they can use the help.”

When the weather is good, the older children go outside to shoot basketball, pick up sticks, or pretend to make a fire, Hutton said. There’s also a gym set that they can walk on, plus a sliding board. When inside, Hutton reads books to them. He learned to read familiar stories, such as Frosty the Snowman, upside down so the children could see the book’s pictures.

“The good Lord wants us to help someone else. We can express ourselves and help them a little bit. It’s also a generational thing. Their grandparents may not be here, so we can fill in and be part of their learning and see their growth,” Hutton, 89, said.

Not only does volunteering help the children, but “it does me so much good to associate with the youth, their cuteness, innocence. They are beautiful children,” Hutton said.

“When you are in a retirement home with no car, no wife now — it’s good to get out. The kids are good for you. It’s terrific therapy for me. It keeps me active, my mind going, my legs going ... They do wonders for you.” 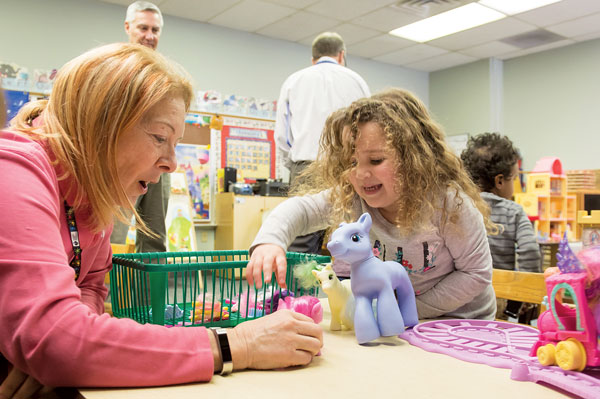