COVER STORY: A Bus Ride to Days Gone By

What comes to your mind when you think of traveling in a Volkswagen bus? Driving along a breathtaking California coastal highway? Maybe camping in Arizona with beautiful red-rock formations in the background?

For Eric and Celia Turzai, they don’t have to imagine what traveling around in a VW bus is like … for them, it’s a normal occurrence, and it happens right here in central Pennsylvania among the abundant cornfields and picturesque Amish farms.

Eric Turzai was born and raised in Hershey, attended Penn State majoring in hotel/restaurant/institutional management, and received his B.S. in business administration from Elizabethtown College.

He is currently employed as the director of dining services at Elizabethtown College, a position that keeps him very busy but still allows him time to indulge in his passion for VWs.

What would become that lifelong interest didn’t happen right away.

“My first car at 16 was a 1968 VW Bug convertible,” he said. “I wasn’t entirely thrilled with it. Dad picked it out because it was available and affordable.”

To say that first car wasn’t in tiptop shape would be an understatement. The floorboards were gone, and the top needed replacing, so “I only had it about a year because it was too expensive to repair,” he said.

When Turzai started college, he acquired a different VW bug, also chosen by his dad, for the same reasons as the first one: It was affordable.

The Turzais met and began dating while attending Penn State in 1985. Eric Turzai’s employment eventually took them to Arizona, where they were married in 1987. In 1988, his employer transferred him to Reno, Nevada.

It was while these newlyweds were living in Reno that his love affair with VWs truly began.

“On the way back from Lake Tahoe one day, I saw a cherry-red 1968 Karmann Ghia and fell in love with it,” Turzai recalls. “I bought it and enjoyed working on it, and that started my deeper interest in all VWs.”

One reason for the popularity of VWs in the western part of the United States is that rust isn’t as big of a problem as it is in the East.

“Also, they were easy to find, and you could make some interesting deals to obtain them,” Turzai said. “I once received a hot tub as payment for one I sold.”

Eric Turzai enjoys working on air-cooled engines, which are a staple of the VW brand.

“They keep me challenged and give me something to analyze and work out a solution for,” he said.

The VW Camper Bus in particular has a special place in Turzai’s heart.

“They are different and unique and rarer,” he said. “I would like a pre-1967 bus because of the split window in front, but they are very expensive to obtain.”

He has studied the history of the introduction of VWs, the manufacturing of them, and the evolution of the brand, but mostly, he said, “I just think they are cool vehicles, and I like working on them.”

These days, the VW Camper Bus that sits pride of place in their Elizabethtown driveway goes by the name of Rosie (a name suggested by the Turzais’ daughter). Purchased in 2010, Turzai recalls that he “happened to be on Craigslist and saw it. The owner needed money for rent and was selling it for $2,500.”

Rosie, a 1974 model, still had all her original equipment and was in pretty good condition. The previous owner had painted her green, but her original color is orange.

“I have redone the interior — the walls, the upholstery, new flooring, curtains, stereo, and a 1976 engine,” Turzai said.

Celia Turzai supports her husband’s interest because she enjoys hearing about the projects and helping him figure things out.

“Often, he needs to talk through a problem, and even though I can’t help him or answer a question, just the process of talking it through helps him figure it out,” she said.

Even though she doesn’t quite share his level of interest, Turzai must admit that the bugs and buses “are cute, and I do enjoy seeing how different people have done different things with them,” she said.

“It was interesting when we lived out West to see the older ones and how well they were maintained.”

Growing up, Turzai did a lot of camping with her family; she said if they were younger, she would love to go camping in Rosie.

“I like how the camper buses have all you need to go camping with,” she said.

She was also a big help with the restoration work, making curtains and helping choose the wood and the layout for the flooring.

“I am always holding a flashlight, or handing over a tool, or holding something in place or out of the way, or listening, or giving my opinion,” she said.

With retirement in the not-too-distant future, the Turzais are hoping to share their love of VWs with others by offering Rosie for photo opportunities at weddings, parties, and corporate events.

It is an idea they are working on together as a means of future additional income that would be creative and fun and would not bind them into a full-time commitment.

“The bus itself would be the photo booth, with the camera mainly inside,” Eric Turzai said. “The bus could also be used as a backdrop for outside photos with various-themed props available relevant to the theme of the event. We think the bus itself provides a unique frame for photos.”

They’ve already loaned out Rosie once for a wedding reception, where she was parked in front of a barn.

“I think the bus softens the feel of the photos. It has soft lines and a relaxed stance, and it looks easy, comforting, and inviting,” Celia Turzai said.

The idea of making such a big life change, and starting their own business, is daunting, but the Turzais are doing their homework.

“There are others who do it, and we’ve looked at their websites for ideas and details such as the reservation process, pricing, packages, and policies,” Eric Turzai said. “We also talked about buying one or two fully restored and functioning camper buses and renting them out … but there are many factors to consider before we would embark on that venture.”

Whatever the future may hold, this couple is looking forward to spending their retirement years together doing the things they love: camping, traveling, and visiting friends and family.

“We are also looking forward to continuing to work on Rosie, or any other projects that may pop up,” Turzai said.

And those projects will surely include a VW or two. 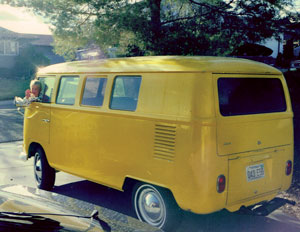 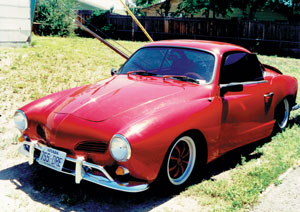 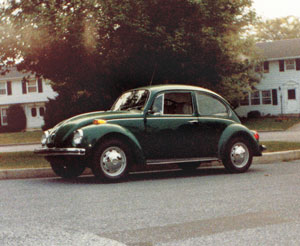 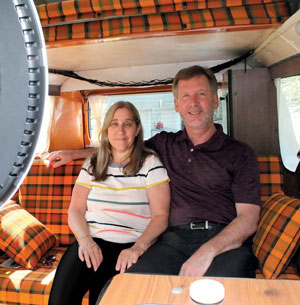