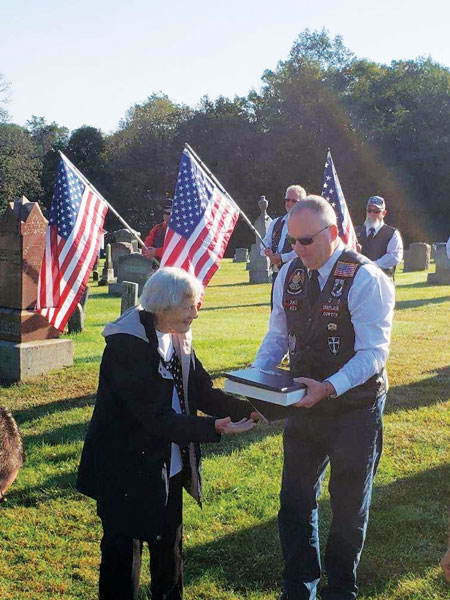 In honor of Cpl. Alvin T. Rehmeyer, members of the American Legion Riders Stewart Post No. 455 recently held a memorial flag line ceremony at St. John Lutheran Church’s cemetery in York to mark the 100th anniversary of the Red Lion native’s death in World War I.

Myrna Hyson-Ross, Rehmeyer’s niece, and other family members represented Rehmeyer at the service, led by American Legion Post No. 455 commander Bobby O’Farrell. O’Farrell read a tribute to Rehmeyer that was entered into the congressional record by U.S. House Rep. Scott Perry.

In 1919, the Stewart American Legion hosted Rehmeyer’s funeral at the St. John cemetery. The entire town was closed for the funeral and burial.

York County Commissioner Chris Reilly presented Hyson-Ross with a U.S. flag that flew in honor of Rehmeyer over the Capitol in Washington, D.C., at Perry’s request; a proclamation honoring Rehmeyer from the York County commissioners; and a World War I Victory Medal.

Reilly spoke of Rehmeyer’s commitment and courage, detailing his journey from Red Lion to Camp Meade (Fort Meade, Maryland), to his service in France.

On Sept. 26, 1918, Rehmeyer was declared missing in action following an attack during the Meuse-Argonne Offensive. His fate was unknown until March 20, 1919, when his gravesite was located near the town of Montfaucon, France.

Rehmeyer is one of the 1,151 soldiers of the 79th Division who gave their lives in defense of the United States and her allies during World War I.