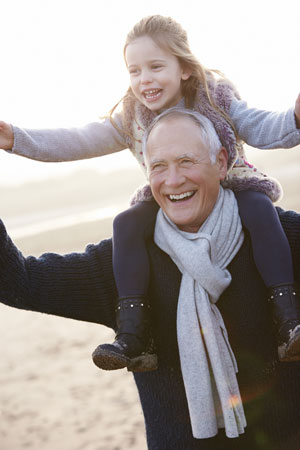 Older But Not Wiser: The Nose Gets Lucky

The day started off great. I was taking my 3-year-old granddaughter, Summer, for a walk around the neighborhood. We were having a contest—who could spot the most birds. OK, I may have cheated a little and counted one bird twice, but she’s 3 years old has to learn the ways of the world.

I was thinking of writing an article about when we should let our grandchildren win when, suddenly, something else happened.

We passed this guy who was also going for a walk. He called out to me, “Didn’t you used to be an actor?”

I yelled back, “No,” but I have to admit that at first I was really pleased. He thought I looked like an actor! But then, of course, my paranoid side started to take over.

Was he saying I was a “has-been”? That I was washed up and I couldn’t get any more parts?

OK, I’m not an actor, so these feelings are crazy. But as I guess you know by now, crazy is my middle name. Actually, I have two middle names: The first one is “very.”

My feelings are at least understandable. I come from a family where everyone has to look like somebody. My Uncle Mort thought he looked like Don Ameche. Unfortunately, he looked more like Don Rickles.

And someone once told my cousin Irene that she looked like Veronica Lake. To enhance this look, she always swept down her hair to cover one of her eyes. It didn’t work, and she kept bumping into the furniture.

The thing is, my relatives happily thought they looked like somebody handsome or beautiful and were content with their delusions. I, on the other hand, had a terrible complex about my nose. In high school my nickname was The Nose (it was not a very creative high school).

I was afraid the actors I looked like were Jimmy Durante and Al Lewis (he played Leo Schnauser in Car 54, Where Are You? and Grandpa Munster). Was the stranger referring to one of those large-nosed actors?

Even though I’m in my 60s and should be past all these feelings, it just took a simple question to make all my insecurities rise up.

I would have to turn to an expert, so I asked my granddaughter who I looked like. Without hesitating, she said, “SpongeBob.”

“OK,” I replied, “but he’s a cartoon character and I think my body is better than his. You have to pick a real person.”

Again, without hesitating, she said, “Bert and Ernie.”

“OK,” I replied, “first of all, Bert and Ernie are two people. And secondly, they are puppets.”

My granddaughter looked at me and then said, “Grandpop, you’re silly.”

We then continued walking, and after a few steps she turned to me and, with a very serious look on her face, said, “You’re more better handsome than Bert and Ernie together.”

And that’s all I needed. That made my day. I was better looking than two puppets together. My nickname would no longer be The Nose; it would be The Puppet Master.

And the next time Summer and I have a contest about how many birds we see, I’ll definitely let her win. Maybe.