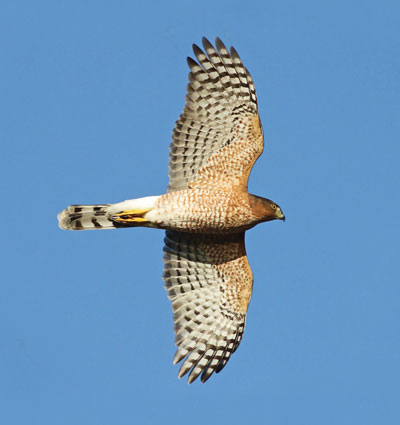 The Beauty in Nature: Predators on Our Lawn

I remember at least four kinds of predatory animals having killed and eaten other, smaller creatures on our suburban lawn.

A few Cooper’s hawks, a sharp-shinned hawk, a house cat, and a great blue heron are the predators. And the prey has been small birds at our birdfeeders and goldfish in our 100-gallon outdoor fishpond.

Several times I have seen Cooper’s hawks sweep swiftly “out of nowhere” and zip right at our birdfeeders. Each time, one or a few mourning doves quickly fly up erratically and away to escape the speeding hawk. One time, a couple of those panicky doves crashed into windows on our house, one to its death.

And a few times in winter, I’ve noticed Cooper’s hawks perched in bare trees to consume their dove victims, with some of the preys’ feathers floating slowly to the ground.

Once I saw a Cooper’s hawk careen into a thorny barberry bush after doves sheltering there, but to no avail. The doves dashed out the other side of the bush and were away in swift flight.

Sharp-shinned hawks are about the size of mourning doves, so their main prey at our birdfeeders has been house sparrows. One January morning, when looking out a window at a snowstorm, I saw a sharp-shin hunkered down and ingesting a house sparrow it killed. The little hawk tore off chunks of meat, while feathers blew away over the snow cover.

When the sharpy was finished dining, it flew off into the storm and was gone, leaving a sparrow foot and beak on the snow, which falling snow quickly buried as if that drama I witnessed never happened.

One early evening around the end of March, I walked by a window in our house when I heard a thud outside. I quickly looked out the window in time to see a grown house cat drop from a birdfeeder with a female cardinal in its mouth.

I’ve seen house cats stalking birds around our birdfeeders before, but this was the first cat I saw actually catch a bird. Upon touching the ground, the cat ran off with its prize and squeezed under a utility shed to consume it.

One day early in March of another year, I went in our yard to feed our goldfish in their 100-gallon pond. The fish rise to the surface when they see a human figure because they associate that with being fed.

But that day, only one fish came to the surface. I was stunned, and then wondered what happened to the other goldfish. I saw no dead bodies on the surface of the water, the pond bottom, or the ground around the pond. I then thought a cat, mink, or great blue heron caught and ate them.

Late in the afternoon, a few days later, I saw a majestic great blue heron flap ponderously and low up our street, regally circle our lawn twice, and land heavily on a needled limb on a tall spruce tree in our yard, probably to roost there for the night.

A neighbor saw that heron, too, and asked if I saw a heron by our pond a few days ago. The mystery was solved! That heron ingested our goldfish!

Readers may have had similar experiences at home, adding more excitement to your lives. The drama of nature is everywhere, even in human-made habitats and one’s own lawn.