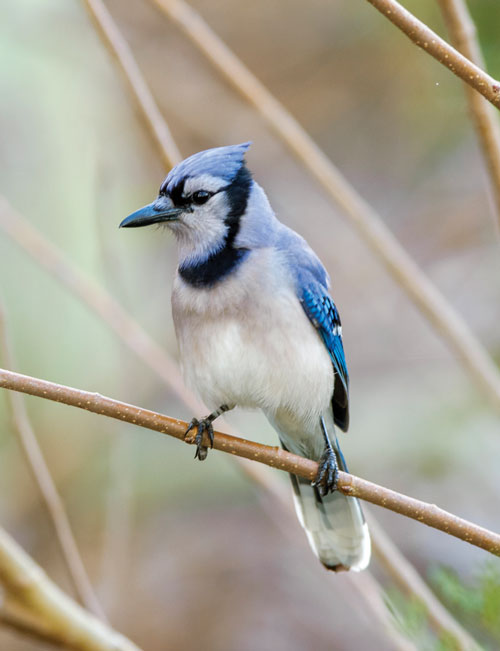 We’ve had blue jays in our yard for the more than 30 years I’ve lived at my home. Having blue feathering with black and white markings, blue jays are attractive and welcome on our lawn.

And, related to crows, as all species of jays are, our jays at home are adaptable, boisterous, and entertaining, as all jays are.

Blue jays are the only kind of jay native to the northeastern United States. But five other species of jays live in North America, most of them in the American West.

All species of jays are intelligent and social and have other characteristics in common, demonstrating their common ancestry. Most jays are colorful and all are attractive, each type in its own way. All species are omnivorous, eating invertebrates, birds’ eggs, seeds, fruit, and most everything else, each kind in its own niche.

Each kind of jay has its own traits, making it a distinct species. Steller’s jays are 11 inches long and have dark-brown feathering in front and blue jay-like feathering on their wings, backs, and tails.

Each Steller’s has a dark crest on its head that makes it taller. Like blue jays, Steller’s imitate bird sounds. But this elegant species lives and nests only in coniferous forests along America’s Pacific Coast from Mexico to Alaska.

Ten inches long, scrub jays have long, blue tails and blue wings and heads but have beige-gray feathering elsewhere. This pretty species mostly inhabits pinyon pine-juniper woods in the foothills of the Rocky Mountains in the American West and Mexico. There, they mostly consume pinyon seeds and juniper cones.

Nine inches long, pinyon jays resemble small crows, but these handsome jays have blue-gray feathering all over. This kind of jay is well named because it lives among pinyon pines and relies heavily on those pines on mountains in the western United States.

These jays have large, stout beaks because their staple food is pinyon seeds. And they nest in pinyon pines.

Canada, or gray, jays are the plainest of North American jays. Ten inches long, they have gray feathering all over, except white on their foreheads and necks and black caps, which make them look a little like large chickadees. Their plumages are thick and fluffy for great insulation during cold Canadian winters.

Gray jays live in the mixed coniferous/deciduous forests of Canada. They ingest anything edible and store food for winter.

Green jays live and nest in brushy habitats from northern Central America to southern Texas. They mimic other birds and use sticks to pry loose tree bark to seize exposed invertebrates.

Jays are a colorful, intelligent, and interesting family of birds. They offer joy and intrigue to anyone who spots them.