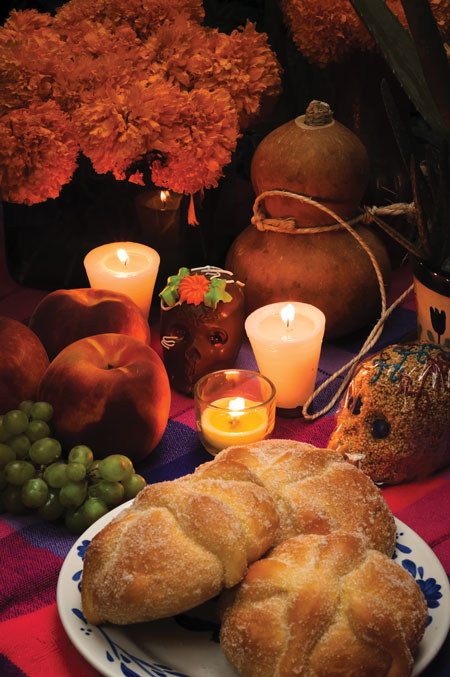 The Mexican celebration of Día de los Muertos (Day of the Dead) is often mistaken for a Spanish version of Halloween. It is actually a way for families to honor loved ones who are no longer living.

Scholars believe the tradition is rooted in ancient Aztec culture. Thousands of years before Columbus ever set foot in the New World, Aztec people honored the lives of their deceased ancestors in celebrations that spanned what is now the month of August.

Indigenous populations throughout central and southern Mexico maintained these practices for centuries.

With the arrival of Spanish settlers in Mexico in the 16th century and the influence of Christianity that followed, the practice transformed into a three-day celebration paralleling the Allhallowtide of All Saint’s Eve, All Saint’s Day, and All Soul’s Day, taking place Oct. 31–Nov. 2.

In the 21st century, the observance of Día de los Muertos begins at midnight on Oct. 31, when it is believed that the souls of the dead are allowed to return to be with their loved ones.

Día de los Angelitos (Day of the Little Angels) or Día de los Inocentes (Day of the Innocents) falls on Nov. 1, when the souls of deceased children and infants are believed to return.

Día de los Muertos follows on Nov. 2, when the spirits of the ancestors are honored.

During this time, families will create altars in their homes or at the cemetery, where they tidy and decorate the graves of their loved ones.

Ofrendas (offerings) of food, sweets, toys, trinkets, marigolds, and beverages are left on these altars. Family and friends share stories of their loved ones, sing songs, offer prayers, and feast as a tribute to the departed.

To dance, especially at the gravesite, is a way to awaken the spirits and invite them to join the family once more. The parades and large festive gatherings in cemeteries are just another way to show respect and celebrate the lives of those who have passed on.

Día de los Muertos is observed throughout Mexico, most of North and South America, and around the world.